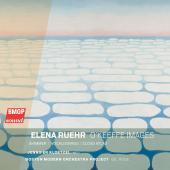 The four orchestral works of composer Elena Ruehr that are assembled on this alluring disc by the Boston Modern Orchestra Project are striking for their combination of rhapsodic, almost sinful lushness and a robust force that keeps the effect from cloying. Her signature orchestrational move is to pull you in with the strings and then let the brass punch you in the gut, and it works every time — even when you know it’s coming. Even the overall course of the disc works that way.

This is one of two recordings from the Boston Modern Orchestra Project (BMOP) of which I received an mp3 preview. I regret that the other was well removed from my comfort zone.

I’m not aware that I have encountered the music of Elena Ruehr before, though there are two recordings of her music on Avie, one of which, also recently released, with the generic title Lift, contains chamber music (AV2319). The earlier CD, of music for soprano, baritone, chorus and orchestra was well received, though we seem to have missed it here at MusicWeb International (AV2263).