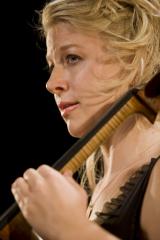 Ms. Kloetzel is noted for her elegant playing and has given numerous recitals, including concerts for San Francisco Performances and on WQXR in New York. This past year, she gave two world premieres for solo cello: the Cello Suite by Daniel Asia and a work written and dedicated to her by composer Elena Ruehr called Lift, which she has recorded for the Avie label to be released as the title track of an all-Ruehr CD in November 2014. Ms. Kloetzel premiered Elena Ruehr’s Cello Concerto Cloud Atlas in 2012, which prompted the San Jose Mercury News to proclaim her a “terrific soloist…with a robust and earthy sound.” She is a winner of The Juilliard School’s top award, the Peter Mennin Prize for Outstanding Leadership and Achievement in Music, and a Presser Music Award, as well as a Fulbright Grant to England. In 2004 she was honored with the McGraw-Hill Companies’ Robert Sherman Award for Music Education and Community Outreach in recognition of years of outreach work in schools and community centers. She has appeared at the Santa Fe Chamber Music Festival, the Sarasota and Aspen Music Festivals, the Britten-Pears School, and the Prague Mozart Academy, and performed as cellist of the Cassatt Quartet during the 1995-96 season.

From 2003-2009, Ms. Kloetzel taught cello and chamber music at San José State University, where the Cypress String Quartet was Ensemble-in-Residence. She has given master classes at The Juilliard School, San Francisco Conservatory and at universities throughout the U.S.

Together with her colleagues in the Cypress String Quartet, she has been broadcast on radio stations from coast to coast, and has been featured numerous times on National Public Radio’s “Performance Today.” The Cypress String Quartet has received the Copland Award for championing living American Composers and has also commissioned and premiered more than thirty works. Ms. Kloetzel has recorded 15 CDs with the CSQ, most recently an all-Schubert disc on the Avie label. She has performed as principal cellist of the Concert Artists of Baltimore, the Baltimore Opera and the Juilliard Orchestra (under Maestro Kurt Masur), and has performed as soloist with numerous orchestras, performing concertos by Brahms, Dvořák, Elgar and Haydn. Ms. Kloetzel plays a cello by Hieronymus Amati II, made in Cremona in 1701.