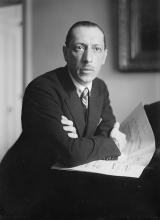 Igor Stravinsky (1882-1971) is often considered something of a revolutionary, in part based on the riotous reception of his ballet The Rite of Spring. Stravinsky's career, however, suggests more evolution than revolution. Perhaps no other composer in this century -- or any -- has written in such a variety of styles. And it is the unique genius of Stravinsky that his musical personality is detectable in each of these styles.

Stravinsky came from a musical family, although his training was limited, reflecting his family's desire that he pursue studies in law. As a student at the university in St. Petersburg, he made the acquaintance of Nicolai Rimsky-Korsakov, and studied with the older composer. His music quickly caught the attention of Serge Diaghilev, the director of the Ballets Russes in Paris. Stravinsky was commissioned to write a ballet for the theater, his Firebird. This was quickly followed by Petrushka and The Rite of Spring.

Stravinsky continued his association with Paris, but with the advent of World War I and the turmoil in Russia that would lead to the October Revolution, Stravinsky took refuge in Switzerland. After the war he returned to Paris, writing more ballets for Diaghilev, as well as a wide variety of other works, many (such as his Piano Concerto) serving as performance vehicles for the composer. In 1939, he emigrated to the United States, where he attempted unsuccessfully to write music for films. He continued composing late into his life, and when he was well into his eighties he embarked on a full schedule of performances as conductor, both in concert and on record. These recordings serve as valuable documentation of Stravinsky's ideas concerning his own music.

Along with his changing nationalities, Stravinsky's music underwent remarkable change over the course of his life. His early music (for example, the Symphony in E flat) show the influences of his Russian models. His ballets show a wider range of influences, including that of Claude Debussy. By The Rite of Spring, Stravinsky had broken new ground entirely, writing in a complex rhythmic style and a harmonic style that included the use of polytonality. This increasing complexity came to an abrupt end with his move to Switzerland, and he produced a seminal group of pieces in a pared-down instrumental style (often without strings), the most notable being the small dramatic work, Histoire du soldat for four speakers and a small instrumental ensemble. When he returned to Paris, he continued this more austere style, and added to it an interest in older forms and methods, beginning his well-known neoclassical period. The culmination of this can be seen in his opera The Rake's Progress, a modern adaptation of the classical style of Mozart's late comedies. Late in his life, Stravinsky once more changed styles, embracing the methods of twelve-tone and serial composition. What resulted is a remarkable series of works including his ballet Agon and a great deal of religious music.

In all these works, certain qualities remain constant. First and foremost is a clarity of sound, an almost transparent texture heightened by his masterful use of orchestration. Along with this is an approach to rhythm that articulates his melodies with a certain dryness, adding to the clarity of sound. Finally, there is a concise and economical approach to form. This has its roots in the simplified style of his music from the 1920s, but was a hallmark of his style throughout his career.

On Friday, May 18, The Boston Modern Orchestra Project gave its Jordan Hall audience a theme-based concert, four 20th-century works works, tied by our understanding of Apollo as "Apollon Musagè," from his role as leader of the muses. One of the muses is, of course, Terpsichore, and this is the muse underpinning the first set of pieces, 5 Greek Dances by the Greek composer, Nikos Skalkottas.

It has been a big year for Gil Rose, founder and conductor of the Boston Modern Orchestra Project, which two weekends ago (!) mounted a pleasing evening of classically-themed pieces collectively dubbed "Apollo's Fire."

As the Globe's Jeremy Eichler pointed out in his review of the Boston Modern Orchestra Project's season-ending concert — called "Apollo's Fire" — referring to the program note by the BSO's Assistant Director of Program Publications Robert Kirzinger, the term "classical music" has become so all-inclusive that it doesn't have much at all to do with ancient "classical" art. But two recent live performances, by BMOP and the Mark Morris Dance Group, have focused on music that refers to ancient classical themes.

We don't tend to think much about the "classical" in classical music, the art form's links to ancient Greek culture. But as Robert Kirzinger reminded listeners in a program essay for Friday's Boston Modern Orchestra Project concert in Jordan Hall, the phrase classical music itself — while today almost meaningless in its catch-all nature — still acknowledges its implicit debt to more ancient pasts.

Rounding out its concert season, Boston Modern Orchestra Project under the direction of Gil Rose presented a concert entitled "Apollo's Fire" in Jordan Hall on Friday night. The four works on the concert took their inspiration from Apollo and the Muses, either explicitly or implicitly; the other link in this program – one not expressed in the program notes but one I found to be omnipresent – was the idea of dance. The evening began with a pre-concert talk presented by The Score Board, largely in conversation with Lewis Spratlan.

Friday night's concert of the Boston Modern Orchestra Project was all about the Greek debt.

Ours to them, that is. The program at New England Conservatory's Jordan Hall, titled "Apollo's Fire," celebrated the continuing power of ancient mythology in Western thinking and art of the 20th and 21st centuries.

If you attended a performance of the Boston Symphony Orchestra last fall, chances are pretty good that you heard one or more of Beethoven’s symphonies. The BSO, widely recognized as one of the world’s most elite orchestras, presented a complete set of these vaunted works throughout October and November and has several additional performances scattered throughout their concert season. My hometown orchestra, the New Haven Symphony Orchestra, dedicated this, their 116th season, to the theme “Beethoven and Beyond.” Their concerts are centered around a complete series of the nine symphonies.

Time was when Boston had a City Censor, and books and plays drummed up trade by having them “Banned in Boston.” The Boston Modern Orchestra Project, headed by conductor Gil Rose, came up with the deliciously punning title “Band in Boston” for its Jordan Hall concert on January 22. Indeed there was not a bowed string instrument to be seen on stage all evening – nothing but 36 wind players, plus five percussionists, a harpist, and three pianists.

The BMOP continued its season last Friday with their Band in Boston concert, celebrating 20th and 21st century music for wind ensemble with two repertoire mainstays by Stravinsky and Percy Grainger, as well as some newer compositions by Harold Meltzer, Wayne Peterson, and Joseph Schwantner. Robert Kirzinger’s excellent program notes make the case that band music has lost some of its historical prestige because the bands (military, university, etc.) have themselves lost their prestige, despite their ability, popularity, and cultural and social significance.

The Boston Modern Orchestra Project is known for exploring a wide variety of 20th- and 21st-century instrumental music. On January 22nd at New England Conservatory’s Jordan Hall, under the baton of music director Gil Rose, the group forayed into wind ensemble territory with a program of varying styles and with mixed effectiveness.

If you saw sparks flying over Boston’s Back Bay last night, it might have been the result of the energy and excitement generated by the Boston Modern Orchestra Project during their performance in Jordan Hall. BMOP’s primary mission is to commission, perform and record new orchestral work. They also perform 20th-century “classics” with great gusto.

This is an emotionally complex, interesting piece, restless, but structured, and Gil Rose and the orchestra delivered it authoritatively.