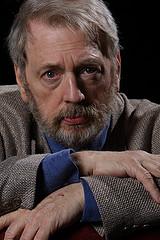 William Thomas McKinley is one of the most highly regarded and well-known composers of his generation, and has been likened to "Ives on steroids" and "Stravinsky gone mad." He learned both classical and jazz piano at a very early age, becoming the youngest member of the American Federation of Musicians at just twelve years old. To date, he has composed over 350 works, is listed in the Groves Dictionary of Music and Musicians, and has received commissions from the Lincoln Center Chamber Music Society, the Fromm Music Foundation, and The Walter W. Naumburg Foundation. His many awards and grants include, among others, an award and citation from the American Academy of Arts and Letters, a Guggenheim Fellowship, the Koussevitzky International Recording Award, and eight grants from the National Endowment for the Arts. McKinley has studied with many renowned teachers and composers, including Aaron Copland, Lukas Foss, and Gunther Schuller, and as a jazz pianist has performed, composed, and recorded with Dexter Gordon, Stan Getz, Eddie Gomez, Gary Burton, Miroslav Vitous, Rufus Reed, Roy Haynes, and Billy Hart, to name a few.

In 1992, McKinley founded MMC Recordings with the goal of connecting composers with the finest orchestras, conductors, and performers in the world, releasing their recordings, and creating an archive of modern classical music. The label's primary collaborators include luminaries such as clarinetist Richard Stoltzman (a longtime friend and supporter of McKinley and his music), conductors Gerard Schwarz, Marin Alsop, Carl St. Claire, George Manahan, Kirk Trevor, Gil Rose, as well as the London Symphony Orchestra, Seattle Symphony Orchestra, Warsaw Philharmonic, Boston Modern Orchestra Project, and many more.

In recent years, McKinley has become even more prolific, and his works are featured on releases from Koch Records, Delos Music, and RCA Red Seal, in addition to those on MMC. 2006 saw the premiere of R.A.P., a double concerto for Richard Stoltzman (clarinet) and his son Peter (piano), with the Boston Modern Orchestra Project, and Nonet for the Quintet of the Americas at Carnegie Hall. In 2007, selections from McKinley's Piano Etudes were premiered at the Tanglewood Festival of Contemporary Music, and in 2009, Gil Rose conducted BMOP in the world premiere of Recollections.

The composer and New Kensington native William Thomas ("Tom") McKinley died on Feb. 3 at the age of 76. Born on Dec. 9, 1938, Mr. McKinley is best known for concert music composed in the jazz idiom but had forays into neo-classicism, atonality and electronic music. He attended the Carnegie Institute of Technology (now Carnegie Mellon University) in 1956, where he met his longtime friend and colleague David Stock, a local composer and the founder of the Pittsburgh New Music Ensemble, who describes him as "one of our most important Pittsburgh artists of any kind."

BMOP/sound, the nation's premiere label launched by an orchestra and dedicated exclusively to new music recordings, today announced its May 2010 release, William Thomas McKinley: R.A.P. With more than 350 works to his name and awards from the American Academy of Arts and Letters, a Guggenheim Fellowship, and the National Endowment for the Arts, McKinley has established himself as one of the most highly regarded and prolific composers of his generation.

William Thomas McKinley (Tom to his friends and family) is a protean personality, a composer of more than 300 works of great diversity, who embraces the classical and jazz worlds with equal proficiency and gusto. His is a restless, exploratory mind that ceaselessly seeks to expand the boundaries of musical form and substance without abandoning the essential building blocks of melody, rhythm, and harmony.

That rather gaudy sign in Jordan Hall reading “New England Conservatory” is intended to remind audiences of the institution where this acoustic jewel is located. Rarely is its presence so apt as during the Boston Modern Orchestra Project’s annual “Boston ConNECtion” concert, recognizing the ongoing relationship between the ensemble and the school. The 11th such performance, on Saturday, was a typically substantial affair, dexterously played by the ensemble and conducted with authority by Gil Rose.

I believe I’m supposed to blame Theodor Adorno for this, but somewhere along the way in the 20th century’s formative years, modern music got divvied up between “serious” and “popular” ears. As lame distinctions go, this one has proven particularly persistent, hanging around to this day in boiled-down form as an opposition between fun and not-fun. In any case, it has left us with an unnecessary schism in the way we understand American music.