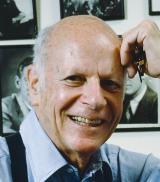 Schuman was born into a Jewish family in Manhattan, New York City, son of Samuel and Rachel Schuman. He was named after the 27th U.S. president, William Howard Taft, though his family preferred to call him Bill. Schuman played the violin and banjo as a child, but his overwhelming passion was baseball. He attended Temple Shaaray Tefila as a child.[1]While still in high school, he formed a dance band, "Billy Schuman and his Alamo Society Orchestra", that played local weddings and bar mitzvahs in which Schuman played string bass.

In 1928 he entered New York University's School of Commerce to pursue a business degree, at the same time working for an advertising agency. He also wrote popular songs with E. B. Marks Jr, a friend he had met long before at summer camp. Around that time, Schuman met lyricist Frank Loesser and wrote some forty songs with him. Loesser's first published song, "In Love with a Memory of You", credits the music to William H. Schuman.

On April 13, 1930, Schuman went with his older sister, Audrey, to a Carnegie Hall concert of the New York Philharmonic, conducted by Arturo Toscanini.[citation needed] According to the Philharmonic's archives, the program included works by Brahms, Mendelssohn, Castelnuovo-Tedesco and Smetana.[2] Of this experience, Schuman later said, "I was astounded at seeing the sea of stringed instruments, and everybody bowing together. The visual thing alone was astonishing. But the sound! I was overwhelmed. I had never heard anything like it. The very next day, I decided to become a composer."[this quote needs a citation]

Schuman dropped out of school and quit his part-time job to study music at the Malkin Conservatory with Max Persin and Charles Haubiel. From 1933 to 1938, he studied privately with Roy Harris. In 1935, he received a B.S. degree in music education from Teachers College at Columbia University. Harris brought Schuman to the attention of the conductorSerge Koussevitzky, who championed many of his works and conducted Schuman's Symphony No. 2 in 1939. Possibly Schuman's best known symphony, the Symphony for Strings, was commissioned by the Koussevitzky Foundation, dedicated to the memory of Natalie Koussevitzky, and was first performed under Koussevitzky on November 12, 1943.[citation needed]

Schuman won the inaugural Pulitzer Prize for Music in 1943 for his Cantata No. 2. A Free Song,[3] adapted from poems by Walt Whitman. From 1935 to 1945, he taught composition at Sarah Lawrence College. In 1945, he became president of the Juilliard School, founding the Juilliard String Quartet while there. He left in 1961 to succeed John D. Rockefeller IIIas president of Lincoln Center, a position he held until 1969. He won a special Pulitzer Prize in 1985 citing "more than half a century of contribution to American music as composer and educational leader"[4] and he received the National Medal of Arts in 1987.[5]