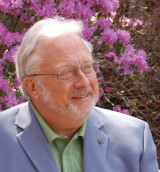 Named 2007 Composer of the Year by Musical America and honored with multiple Grammy Awards for his ground-breaking setting of Blake's Songs of Innocence and of Experience, William Bolcom is a composer of cabaret songs, concertos, sonatas, operas, symphonies, and much more.

With his wife mezzo-soprano Joan Morris, he has performed in concert for more than 30 years throughout the United States, Canada, and abroad. In addition to performing together, Bolcom and Morris have recorded two dozen albums together. Their first one, After the Ball, garnered a Grammy nomination for Joan Morris. Their most recent recordings are two albums of songs by lyricist E. Y. "Yip" Harburg and Gus Kahn on Original Cast Records and Bolcom's complete Cabaret Songs, written with lyricist Arnold Weinstein, on Centaur.

In the spring of 2007 Bolcom was feted in Minneapolis-St. Paul, Minnesota, with a two and a half-week festival of his music, including master classes, recitals and concerts of his vocal, organ and chamber music. Titled "Illuminating Bolcom," the festival was highlighted by two performances of Songs of Innocence and of Experience accompanied by animated projections of Blake's illuminations. The animations were commissioned by VocalEssence and created by projection designer Wendall K. Harrington; she also designed the projections for Bolcom's opera, A View from the Bridge.

In November 2007 his opera A View from the Bridge was produced by the Washington National Opera in Washington, DC. Upcoming in February 2008, his Eighth Symphony will be premiered by the Boston Symphony Orchestra and Chorus in three performances conducted by James Levine in Boston, MA and a subsequent performance in Carnegie Hall.

[Concert Review] Bolcom, BMOP, and the graceful ghost of Ligeti

I’m late with my thoughts on the Boston Modern Orchestra Project‘s “Bolcom with BMOP” evening last Sunday. Which may have something to do with the fact that I was slightly, but not entirely, disappointed by the program. I was drawn to the concert because I’m a fan of its eponymous star, the distinguished American composer William Bolcom - or at least I’m a huge fan (like many people) of his piano and vocal music (a favorite selection, “The Poltergeist,” above).

Friday’s wide-ranging Boston Modern Orchestra Project concert demonstrated how unhelpfully vague the umbrella term “modern music” can be. Some New England Conservatory link was the only correspondence among the disparate works, gathered under the title “Boston ConNECtion” (and performed under Jordan Hall’s architecturally ill-mannered “New England Conservatory” signboard, which continues to intrude on the season’s concert experience like a dinner-time telemarketer).

BMOP has become so popular, you have to look hard in the program to find its full name: Boston Modern Orchestra Project. Founder Gil Rose and his outstanding ensemble celebrated their 10th season at the New England Conservatory on Friday with their annual concert devoted to Boston composers. An enthusiastic and diverse audience (diverse especially in age) cheered, whistled, and hooted its approval for pieces, including two world premieres, by five composers also diverse in age. All the pieces were lively and (unlike Gerontius) fun.

The upshot of the piece seemed to be that every musical style was in effect a kind of harlequin, and the whole of musical history therefore, yes, merely a commedia.