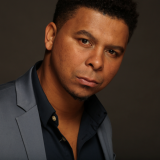 American tenor Victor Robertson’s recent successes include the role of Rinaldo Armida in Virginia in 2019, a role he previously sang in the UK’s prestigious Garsington Opera Festival. Victor made his Metropolitan Opera debut in their new 2017 production of Merry Widow as Raoul, and in the same year, his Broadway debut in its longest running show, Phantom of the Opera as Piangi.

With a natural ability for contemporary music, Victor inaugurated the role of Benny “Kid” Paret in Terence Blanchard’s celebrated Champion in its world premiere in 2017 at Washington National Opera and later revived the role at Michigan Opera Theatre and at Opera de Montreal. He appeared as Hosea Williams in Douglas Tappin’s I Dream, a piece based upon a series of dreams, reminiscences and premonitions leading up to a fateful moment in modern American history—the assassination of Dr. Martin Luther King.

Other significant highlights include the title role in Candide at Opera National de Lorraine in France, the title role in Orpheus at New York City Opera, and Sportin’ Life in Francesca Zambello’s production of Porgy and Bess on tour worldwide; he also appeared as Rodolfo in Zambello’s La bohème at Royal Albert Hall in London.
Making his off-Broadway debut, Victor joined the cast of Three Mo’ Tenors at the Little Schubert Theatre in 2007-8 and remained with the show when it toured the US and when it went on to play the Edinburgh Festival, Moscow, the Dominican Republic, and the UK’s Henley Festival. The artist made his professional debut in Baz Luhrmann’s Rent, an adaptation of Puccini’s La bohème, at the Ahmanson Theatre in Los Angeles in a record 82 sold-out performances, for which he won the coveted Ovation Award in 2004.

This season, the artist sings Remendado (Carmen) at Cincinnati Opera and Alfredo (La Traviata) at Orlando Opera. He records a vocal track for the new George Wolfe film, Rustin (Music Director: Branford Marsalis), and appears as Raymond Santana in Anthony Davis’s Central Park Five at Portland Opera and in the roles of Elijah and Street (Anthony Davis’s X: The Life and Times of Malcolm X) at Michigan Opera Theatre, at Opera Omaha in a later season, and in concert with commercial recording with Boston Modern Orchestra Project; he returns to Cincinnati Opera for their world premiere by Gregory Spears, Castor and Patience, in the role of Nestor.