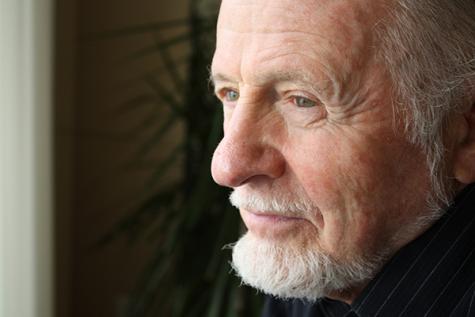 Michael Colgrass (b. 1932) began his musical career in Chicago where his first professional experiences were as a jazz drummer (1944-49). He graduated from the University of Illinois in 1954 with a degree in performance and composition and his studies included training with Darius Milhaud at the Aspen Festival and Lukas Foss at Tanglewood. He served two years as timpanist in the Seventh Army Symphony Orchestra in Stuttgart, Germany and then spent eleven years supporting his composing as a free-lance percussionist in New York City where his wide-ranging performance venues included such varied groups as the New York Philharmonic, the Met, Dizzy Gillespie, the Modern Jazz Quartet, the original West Side Story orchestra on Broadway, the Columbia Recording Orchestra's Stravinsky Conducts Stravinsky series, and numerous ballet, opera and jazz ensembles. He organized the percussion sections for Gunther Schuller's recordings and concerts, as well as for premieres of new works by John Cage, Elliott Carter, Edgard Varese, and many others. During this New York period he continued to study composition with Wallingford Riegger (1958) and Ben Weber (1958-60).

He won the 1978 Pulitzer Prize for Music for Déjà vu,, which was commissioned and premiered by the New York Philharmonic. In addition, he received an Emmy Award in 1982 for a PBS documentary "Soundings: The Music of Michael Colgrass." He has been awarded two Guggenheim Fellowships, A Rockefeller Grant, First Prize in the Barlow and Sudler International Wind Ensemble Competitions, and the 1988 Jules Leger Prize for Chamber Music.

Among recent works are Crossworlds (2002) for flute piano and orchestra commissioned by the Boston Symphony Orchestra and premiered with soloists Marina Piccinini and Andreas Heafliger. In 2003 he conducted the premiere of his new chamber orchestra version of the Bach-Goldberg Variations with members of the Toronto Symphony Orchestra. Most recent works are Bali (2005) and Raag Mala (2006) for wind ensemble, and Side by Side (2007) for harpsichord, altered piano (one player) and orchestra, commissioned by the Esprit Orchestra, the Boston Modern Orchestra Project, and the Richmond Symphony featuring soloist Joanne Kong. The Toronto premiere took place on May 13th, 2007 under conductor Alex Pauk.

Recently, he devised a system of teaching music creativity to children which he has taught to middle and high school music teachers who have used his techniques to teach children to write and perform new music of their own. His articles on these activities have appeared in the Music Educators Journal (September 2004) and Adultita, an Italian education magazine. He has also written a number of works for children to perform.

As an author, Colgrass wrote My Lessons with Kumi, a narrative/exercise book, outlining his techniques for performance and creativity. He also gives workshops throughout the world on the psychology and technique of performance.

He lives in Toronto and makes his living internationally as a composer. His wife, Ulla, is a journalist and editor who writes about music and the arts, and his son Neal is an editor, journalist and screenwriter.

Geographically, Canada is not that far away from Boston. Some of the Canadian music heard Sunday afternoon at Jordan Hall, however, sounded like it was coming from a much greater distance.

The Boston Modern Orchestra Project began its subscription season Sunday with "True North," featuring four composers with ties to our neighbor country. Conductor Gil Rose led his solid ensemble in works by Kati Agócs, Colin McPhee, Michael Colgrass and Claude Vivier, which may not have uncovered any cohesive national identity, but certainly offered much artistic creativity and informed musicianship.

"It's funny. When it started, I really thought that after a while it would change," says Gil Rose, artistic director of the Boston Modern Orchestra Project.

"It's been fifteen years, and producing concerts and making recordings has become an always and forever state. It's fun for me personally, but I really thought that it would get easier over time."

The Boston Modern Orchestra Project (BMOP), the nation's premier orchestra dedicated exclusively to commissioning, performing, and recording new orchestral music, kick-starts its 2011-12 season with a nod to our friendly neighbor to the North, Canada. Paying homage to some of Canada's top composers, BMOP is slated to perform: Vessel by Kati Agocs; Symphony No. 2 by Colin McPhee; Letter from Mozart by Michael Colgrass; and Orion by Claude Vivier.

Full review
[Concert Review] A primer on reinventing the concerto