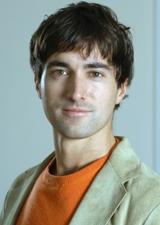 Mason Bates (b. January 23, 1977) was raised in Richmond, Virginia, where he attended St. Christopher's School. He graduated from the Columbia University-Juilliard School Exchange Program, with a BA in music composition and English literature, where he studied with John Corigliano, David Del Tredici, and Samuel Adler. In 2008, he received a PhD in composition from the University of California, Berkeley, where he studied with Edmund Campion.

Mason Bates (b. January 23, 1977) was raised in Richmond, Virginia, where he attended St. Christopher's School. He graduated from the Columbia University-Juilliard School Exchange Program, with a BA in music composition and English literature, where he studied with John Corigliano, David Del Tredici, and Samuel Adler. In 2008, he received a PhD in composition from the University of California, Berkeley, where he studied with Edmund Campion.

Bates's music fuses innovative orchestral writing, imaginative narrative forms, the harmonies of jazz and the rhythms of techno. Frequently performed by orchestras large and small, his symphonic music has been the first to receive widespread acceptance for its expanded palette of electronic sounds, and it is championed by leading conductors such as Michael Tilson Thomas, Leonard Slatkin, and John Adams. He has become a visible advocate for bringing new music to new spaces, whether through institutional partnerships such as his residency with the Chicago Symphony, or through his classical/DJ project Mercury Soul, which has transformed spaces ranging from commercial clubs to Frank Gehry-designed concert halls into exciting, hybrid musical events drawing over a thousand people.

This season, Riccardo Muti and the Chicago Symphony premiere Alternative Energy, an 'energy symphony' that spans four movements and hundreds of years. Another major commission, Mass Transmission, receives its premiere in the San Francisco Symphony's Mavericks Festival, and the composer serves as this season's Project San Francisco artist-in-residence at the SFS. The London Symphony Orchestra and Michael Tilson Thomas recently recorded Mothership, and the work was subsequently premiered at the Sydney Opera House by the YouTube Symphony to an online audience of 1.8 million. Appearing on programs from the Detroit Symphony to Portugal's famed Casa da Musica is The B-Sides, a dance suite that drops into five surreal landscapes. Many purely acoustic works complement his diverse catalogue, such as Desert Transport—recently conducted by Marin Alsop at the Cabrillo Festival—and Observer in the Magellanic Cloud, which toured with the superstar chorus Chanticleer. For more info, go to www.masonbates.com.