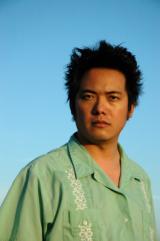 Winner of the 2006-2007 Rome Prize and the 2010-2011 Berlin Prize, Ken Ueno, is a composer, vocalist, improviser, and cross-disciplinary artist. His music coalesces diverse influences into a democratic sonic landscape. In addition to Heavy Metal sub-tone singing and Tuvan throat singing, he is also informed by European avant-garde instrumental techniques, American experimentalism, and sawari or beautiful noise, an aesthetic in traditional Japanese music. Ken’s artistic mission is to champion sounds that have been overlooked or denied so that audiences reevaluate their musical potential. The music pushes the boundaries of perception and challenges traditional paradigms of beauty. In an effort to feature inherent qualities of sound such as beatings, overtones, and artifacts of production noise, Ken’s music is often amplified.

Ken’s music has been performed at Lincoln Center, the Kennedy Center, the Metropolitan Museum of Art, MusikTriennale Köln Festival, Ars Musica, the Muziekgebouw, the Hopkins Center, Spoleto USA, and Steim. He has been the featured a guest composer at the Takefu International Music Festival, Norfolk Music Festival, the Great Lakes Chamber Music Festival, the Pacific Rim Festival, the Intégrales New Music Festival, and the MANCA Festival in Nice, France, where he performed as a vocal soloist in his piece with the San Francisco Contemporary Music Players. Ken’s piece for the Hilliard Ensemble, Shiroi Ishi, has been featured in their repertoire for over ten years, with performances at such venues as Queen Elizabeth Hall in England, the Vienna Konzerthaus, and was aired on Italian national radio, RAI 3. Another work, Pharmakon, was performed dozens of times nationally by Eighth Blackbird during their 2001-2003 seasons. A portrait concert of Ken’s was featured on MaerzMusik in Berlin in 2011.
Awards and grants that Ken has received include those from the American Academy in Rome, the American Academy in Berlin, the Fromm Music Foundation (2), the Aaron Copland House, the Aaron Copland Fund for Music Recording, Meet the Composer (6), the National Endowment for the Arts, the Belgian-American Education Foundation, First Prize in the 25th “Luigi Russolo” competition, and Harvard University. Recently, he performed as soloist in the premieres of his concerto for overtone singer and orchestra in Boston and New York with the Boston Modern Orchestra Project to wide acclaim. A monograph CD of three of his concertos was released on the Bmop/sound label.

In recent years, Ken has been collaborating with visual artists, architects, and video artists to create unique cross-disciplinary art works. With the artist, Angela Bulloch, he has created several audio installations (driven with custom software), which provide audio input that affect the way her mechanical drawing machine sculptures draw. These works have been exhibited at Art Basel as well as at Angela’s solo exhibition at the Wolfsburg Castle. In collaborating with the architect, Patrick Tighe, Ken created a custom software-driven 8-channel sound installation that provided the sonic environment for Tighe’s robotically carved foam construction. Working with the landscape architect, Jose Parral, Ken has collaborated on videos, interactive video installations, and a multi-room intervention at the art space Rialto, in Rome, Italy.

Ken is currently an Associate Professor at the University of California, Berkeley. www.kenueno.com

It has become commonplace to bash the symphony orchestra. All together now: it’s impractical, old-fashioned, a relic, a museum, a bastion of canonic conservatism, a hangover from long-gone eras and aesthetics. We know the drill.

The “modern” in Boston Modern Orchestra Project varies in its meaning. Sometimes it refers broadly to music of the past several decades, such as its recent revivals of operas by Virgil Thomson and Michael Tippett. On Friday at Jordan Hall, though, its focus was on the other sense of the word: what’s happening right now. On the bill were three world premieres, all commissions from composers with local connections and associations with BMOP. This was, to my mind, the group at its vital, cutting-edge best.

The first time I saw Ken Ueno was at the 2004 performance of Philip Glass’s Music in 12 Parts at Alice Tully Hall; he seemed excited and intense, and also strangely disarming. His music is like that, too. We’ve corresponded a few times and I’m always interested in what he’s doing.

BMOP/sound, the nation's foremost label launched by an orchestra and devoted exclusively to new music recordings, today announced the release of Ken Ueno: Talus, an imaginative collection of three innovative concerti by composer/vocalist Ken Ueno (winner of the 2006-07 Rome Prize and the 2010-11 Berlin Prize and UC Berkeley professor). Representing Ueno's debut album on BMOP/sound, Talus constitutes a kind of trilogy that contemplates mortality as well as the multifaceted ways in which survivorship requires heroism.

Gil Rose and the Boston Modern Orchestra Project present, more often than not, anthologized programming: one-night overviews of a single tradition, composer, or genre. Such concerts can veer toward stylistic diffusion, but Friday’s collection of string-instrument concertos presented the opposite danger - a surfeit of similarity.