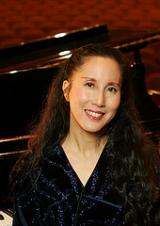 Pianist and harpsichordist Joanne Kong captures the attention of audiences in compelling performances that celebrate the vibrancy and eloquence of musical expression. Embracing a broad range of repertoire from Baroque to contemporary music, her performances have been praised for "great finesse and flexibility" (The Washington Post), "utmost keyboard sensitivity and variety of tone" (Richmond Times-Dispatch), "remarkable technical ability" (The Oregonian), and "superb artistry" (San Antonio Express-News). Tonight's performance marks the US premiere of Michael Colgrass's Side by Side, the first concerto to be written that features a soloist in a dual role as both pianist and harpsichordist.

An acknowledged Bach specialist, Kong has performed for the Los Angeles Bach Festival, Oregon Bach Festival, Abbey Bach Festival, Texas Bach Collegium, Houston Harpsichord Recital Series, and twice was a fellowship performer at the Bach Aria Festival and Institute held in Stony Brook, New York. This coming February she will be guest solo and orchestral harpsichordist for the Winter Park Bach Festival in Florida. Her performances of the Well-Tempered Clavier and Goldberg Variations have received critical acclaim. John Crossett of Soundstage.com writes: "It takes an artist with a great deal of self-confidence, not to mention talent, to undertake recording another version of Bach's Goldberg Variations. Joanne Kong's recording of the work on harpsichord helps to give it a more historically accurate perspective, and her ability at the keyboard offers reason for contemplating its addition to your collection....If you're looking for an alternative to the Gould recordings, this one should head toward the top of your audition list." Kong's other recordings on the Brioso label include Beethoven's Diabelli Variations, English music with Richmond Symphony concertmaster Karen Johnson, and a recording of German and Russian art songs with baritone Zheng Zhou.

A native of Southern California, Kong is the recipient of national and international honors including performance fellowships from the American Academy of the Arts in Europe and the Bach Aria Festival, designation as a Laureate in the 1983 National Beethoven Foundation Fellowship Auditions, three Ruth Lorraine Close Fellowships, and the Irl Allison Grand Prize in the 1985 International Piano Recording Competition. In addition to concertizing, her performances have been broadcast over numerous radio stations including National Public Radio, WQXR in New York and WFMT in Chicago. She is in frequent demand as a piano, harpsichord, vocal and chamber coach, and has been recognized for her exceptional work with gifted young musicians. Dr. Kong is currently the director of the accompanying and chamber music programs at the University of Richmond. A graduate of the University of Southern California and University of Oregon, she has studied with Joanna Hodges, Malcolm Hamilton and Victor Steinhardt, and performed in the master classes of Leon Fleisher and Lorin Hollander.