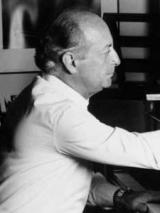 Henri Lazarof was born in Sofia, Bulgaria and began his musical studies at the age of six. He emigrated to America in 1957 and studied at Brandeis University with composers Arthur Berger and Harold Shapero. In 1958, during his Brandeis residency, his string quartet was awarded first prize in a competition sponsored by the Boston area’s Brookline Public Library, and his Cantata was commissioned by Brandeis for its 1959 arts festival. He received his M.F.A. in 1959.

In 1959 Lazarof relocated to Los Angeles, where he began his association with the University of California (UCLA), teaching French language and literature. He joined its music department faculty in 1962, and a year later he organized a festival of contemporary music, featuring works by Luciano Berio, Karlheinz Stockhausen, and Leonard Stein, the renowned Schoenberg scholar. During that same season, Lazarof’s new work, Concerto for Piano and Twenty Instruments received its premiere, after which the New York Times reviewer characterized it as “theatrical and colorful.”

In 1966 Lazarof’s international reputation was boosted by his award of the first International Prize of Milan for his Structures Sonores. Between 1970 and 1971 he completed seven additional works, and during that period he was an artist in residence in what was then West Berlin. Upon his return from Berlin, he was appointed artistic director of the 1973 Contemporary Music Festival at UCLA. In that capacity he commissioned works from four fellow composers, and they were premiered during the festival’s 1974–75 season. Also in 1974, pianist Arthur Weisberg performed Lazarof’s Third Chamber Concerto at Carnegie Recital Hall (now Weill Hall) in New York as well as his Duo-1973, which became one of his most frequently played pieces.

Lazarof’s catholic views on contemporary music and its appreciation and promotion are summed up in his statement in the brochure for the 1973–74 season of the Contemporary Arts Festival. He observed that the concert series was “dedicated to the presentation of the entire broad range of this historically evolving art without adopting a single ideology, but one of continuity—accepting tradition and altering it in terms of contemporary experimentation, which in turn is to become our legacy for the next generation to alter.”

Lazarof was known for his open-minded and ongoing experimentation with evolving contemporary trends and styles. His works have been performed by such major orchestras as the Seattle Symphony and the Berlin Philharmonic, and his dance scores have been presented by such prestigious companies as the San Francisco Ballet. He prided himself in continually searching not only for new means of expression but for fresh instrumental combinations as well. “I believe you should not repeat yourself,” he was quoted as saying. “I try always to write for new instrumental forces—to search out the limits of the performer and one’s own limits as a composer.”