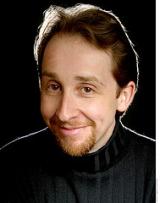 Baritone David Kravitz has been hailed for his "large, multi-layered," and "exceedingly expressive" voice, his "deeply considered acting," and his "deep understanding of the text." Recently the New York Times described him as "a charismatic baritone" and praised his "vividly etched and satisfying interpretation," and Opera News declared him "magnificently stentorian and resonant." The last few seasons have featured his role and company debuts as Scarpia in Tosca at Skylight Music Theatre, Pizarro in Fidelio with Grand Harmonie, Don Magnifico in La cenerentola at Opera Saratoga, Balstrode in Peter Grimes at Chautauqua Opera, and Tevye in Fiddler on the Roof at Ash Lawn Opera. He also created the roles of Davis Miller in D.J. Sparr's Approaching Ali at Washington National Opera, and of Rabbi Lampert in Ben Moore's Enemies, A Love Story at Palm Beach Opera. Other recent opera appearances include Dallas Opera, Glimmerglass Opera, Lyric Opera of Kansas City, New York City Opera, Odyssey Opera, Opera Theatre of St. Louis, Boston Lyric Opera, Chicago Opera Theater, Atlanta Opera, Florentine Opera, and Opera Memphis.

In certain respects, The Fisherman and His Wife picks up where last year's recording by the Boston Modern Orchestra Project (BMOP) and Odyssey Opera, the 2020 Grammy Award-winning Fantastic Mister Fox, left off. Both are delightful, ‘family friendly' operas based on endearing tales, Roald Dahl for Tobias Picker's and The Brothers Grimm (its libretto adaptation by John Updike) for Gunther Schuller's.