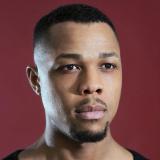 Davóne Tines, deemed a “… charismatic, full-voiced bass-baritone …” by the New York Times, is building an international career commanding a broad spectrum of opera and concert performance. This past season included appearances with the Boston Pops in Symphony Hall and at Tanglewood, where he was a Tanglewood Music Center Fellow, as well as a debut with the American Repertory Theater in the world premiere of Matthew Aucoin’s opera Crossing, directed by multiple Tony Award–winning director Diane Paulus, for which the Wall Street Journal called him a “glowing bass-baritone” and the Stylus Music Journal said he “… brought the house down with his eloquent and painful singing” in the leading role of Freddie Stowers.

The 2015–16 season features his debut at the Dutch National Opera in the premiere of Kaija Saariaho’s Only the Sound Remains, directed by Peter Sellars. In addition to his present performances at Ojai, summer 2016 offers audiences Davóne Tines in a tour of the United Kingdom and France in collaboration with the Festival Daniou and the pioneering chamber ensemble New Vintage Baroque.

Highlights of past seasons include La bohème at the Royal Opera House Oman, La fanciulla del West, and Otello, all under the baton of Lorin Maazel. Tines is a 2009 graduate of Harvard University and 2013 Master of Music graduate of The Juilliard School.