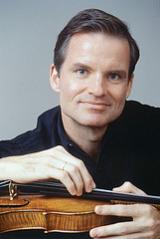 The playing of violinist Curtis Macomber has been praised by Fanfare magazine as "remarkable for its depth of feeling as well as for technical excellence." Mr. Macomber is considered to be one of the most versatile soloists and chamber musicians before the public today, equally at home with and committed to works ranging from Bach to Babbitt, and with a discography ranging from the complete Brahms string quartets to the Roger Sessions solo sonata ("This is one of the best recordings of 20th-century solo violin music ever made." American Record Guide) and the complete Grieg sonatas (released in the fall of 2002 on the Arabesque label).

Mr. Macomber has for many years been recognized as a leading advocate of the music of our time. He has performed in hundreds of premieres, commissions, and first recordings of solo violin and chamber works by, among others, Carter, Davidovsky, Perle, Wuorinen, and Mackey. As first violinist of the award-winning New World String Quartet for 11 years (1982-1993), Mr. Macomber performed the standard repertoire as well as numerous contemporary works in performances in major halls throughout the United States and Europe and, with the Quartet, was appointed artist in residence at Harvard from 1982-1990. He also recorded 14 discs and performed numerous times with the same group on public radio and television in this country and the BBC in Great Britain.

A founding member of the Apollo Piano Trio and a member of the 20th-century music ensemble Speculum Musicae since 1991, Mr. Macomber has also appeared with the New York New Music Ensemble, the Group for Contemporary Music, and the Sea Cliff Chamber Players, as well as in chamber music series across this country and in Europe. He is a regular participant at La Musica in Sarasota and at the Monadnock Music Festival. He has also recorded for Nonesuch, Koch, Vanguard, Pickwick, Musical Heritage, and CRI has just released his third solo recording, Casting Ecstatic. The previous disc, Songs of Solitude, was named by the New York Observer as one of 1996’s best instrumental solo discs: "Macomber's intensely human fiddle...seems an entire universe, sufficient unto itself." A CD of sonatas of Amy Beach and John Corigliano is available on Koch. Mr. Macomber is a member of the chamber music faculty of Juilliard and the violin faculty of Manhattan School of Music and has also taught at the Tanglewood Music Center, the Taos School of Music, and the Yellow Barn Music School. He holds his B.M., M.M., and D.M.A. degrees from Juilliard, where he was a scholarship student of Joseph Fuchs and winner of the Morris Loeb and Walter Naumburg prizes.

Martin Boykan may not be a household name, but judging from the nuanced orchestration and structural integrity of his Symphony for Orchestra, he should at least be better known. The 82-year-old Manhattan-born composer learned his craft under mid-century giants including Aaron Copland, Walter Piston and Paul Hindemith and later taught at Brandeis University. Boykan is fascinated with time. We listen to music sequentially, he says: "And since time passes slowly in music, we are immersed in a world that is richer and more eventful than ordinary life." And so goes this symphony.

Gil Rose and his Boston Modern Orchestra Project is, arguably, the source for new and lesser known modern music, especially that of American composers. Their catalogue includes Grammy-winning releases and a vast array of very interesting works that are, indeed, typically premieres or lesser known. This release of music by Martin Boykan is another great find!