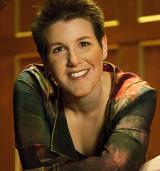 Alison d'Amato is a dynamic and versatile musician, committed to performing and teaching in the full spectrum of solo and chamber music genres. She is actively involved in creating new approaches to chamber music in colleges and conservatories, and has developed several residencies that explore collaborations among performers, often in partnerships with composers. A valued member of several pioneering organizations, she is Artistic Co-Director of Florestan Recital Project and co-founder of the Vancouver International Song Institute (VISI). In all these activities, Ms. d'Amato is dedicated to energizing the relationships and communication inherent in music and bringing students' love for their music to the forefront of their projects.

As both a pianist and teacher, Ms. d'Amato enjoys a variety of engagements that includes interdisciplinary projects with musicologists, composers, writers, and dancers. From 2007-2010 she coordinated Florestan Recital Project’s position of Musical-Artists-in-Residence at Dickinson College, which included a wide variety of concerts and classroom activities that engaged the entire college community expressive in the richness of song repertoire. This residency culminated in the March 2010 Vanguard Festival at Dickinson College that featured world premieres by composers Libby Larsen, Thea Musgrave, Stephen Paulus, Robert Pound, and Thomas Pasatieri. Also in 2010, Ms. d'Amato became a key participant in VISI’s Art Song Lab, a new partnership between VISI and the Canadian Music Centre (Vancouver, BC) which presents new works in collaboration with composers, poets, and audiences. In 2009, she co-produced "Florestan’s BarberFest: The Complete Songs of Samuel Barber" in Boston, Massachusetts, which included the premieres of many unpublished songs obtained by special permission from the US Library of Congress and Barber's estate.

Ms. d'Amato has been a guest teacher and performer at numerous schools including Oberlin Conservatory, University of Toronto, Tufts University, Royal Conservatory of Music, Cincinnati College-Conservatory of Music, SUNY Fredonia, Boston University, and Boston Conservatory. In addition to traditional masterclasses in collaborative repertoire, she has shared classes with colleagues such as musicologist Barbara Heyman, English professor David Ball, singers Lynne McMurtry and Aaron Engebreth, and flutist Barry Crawford. From 2006-2011, she was Visiting Assistant Professor at University at Buffalo, working directly with colleagues to create and enhance collaborations and chamber activities in the music department.

In 2008 and 2009, Ms. d'Amato received rave reviews for her work with Toronto’s Opera In Concert as pianist and music director for Donizetti's Roberto Devereux and Rossini's La Donna del Lago, after her lauded 2006 music directorial debut with OIC in Poulenc's Les Dialogues des Carmelites that featured soprano Isabel Bayrakdarian. Ms. d'Amato has performed at venues across North America, including Boston's Jordan and Symphony Halls and Weill Recital Hall in New York.

Ms. d'Amato received the Grace B. Jackson Prize from Tanglewood Music Center in 2002 acknowledging her "extraordinary commitment of talent and energy." She attended Oberlin College and Conservatory, and earned a double Master of Music degree in solo and collaborative piano from Cleveland Institute of Music. In May 2007, she received a Doctor of Musical Arts degree from New England Conservatory of Music.