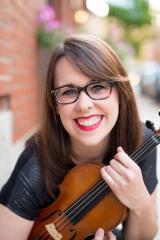 Georgia native Gabriela Diaz began her musical training at the age of five, studying piano with her mother, and the next year, violin with her father. Gabriela graduated with honors from New England Conservatory, receiving Bachelor and Master’s degrees in violin as a student of James Buswell; at NEC, she received the George W. Chadwick Medal, the highest undergraduate award, and the John Cage Award for commitment to contemporary music.

As a cancer survivor, Gabriela is committed to supporting cancer research and treatment in her capacity as a musician. In 2004, Gabriela was a recipient of a grant from the Albert Schweitzer Foundation, an award that enabled Gabriela to create and direct the Boston Hope Ensemble. A firm believer in the healing properties of music, Gabriela and her colleagues have performed in cancer units in Boston hospitals and presented benefit concerts for cancer research organizations in numerous venues.

In 2012 Gabriela joined the violin faculty of Wellesley College.

Critics have acclaimed Gabriela as “a young violin master,” and “one of Boston’s most valuable players.” “…Gabriela Diaz in a bewitching performance of Pierre Boulez’s 1991 Anthèmes. The come-hither meow of Diaz’s upward slides and her sustained pianissimo
fade-out were miracles of color, texture, and feeling.” Others have remarked on her "indefatigably expressive" playing, “polished technique,” and “vivid and elegant playing.”

Highlights of the 2014-15 season include recording Roger Reynolds' solo work, "Kokoro," a premiere of a new concerto by Ken Ueno with the San Francisco Contemporary Music Players, and recitals at the National Gallery in Washington, D.C.

Gabriela can be heard on New World, Centaur, BMOPSound, Mode, Naxos, and Tzadik records.
Gabriela plays on a Vuillaume violin generously on loan from Mark Ptashne and a viola made by her father, Manuel Diaz.

...And in the Moonshine Room at the Club Café, one of the off-the-formal-concert-hall-beats of Gil Rose’s Boston Modern Orchestra Project, we got a rich program, with extraordinary soloists. A percussion tour de force by Samuel Solomon in John Cage’s paradoxically but accurately titled Composed Improvisation for Snare Drum (Solomon using not only his hands and drum sticks, but also a pencil, a gavel, pebbles, space change, and his breath). Rafael Popper-Keizer’s powerful rendition of the last-movement Ciaccona from Benjamin Britten’s Second Cello Suite.