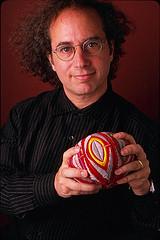 Tod Machover is widely recognized as one of the most significant and innovative composers of his generation, and is also celebrated for inventing new technology for music, including Hyperinstruments which he launched in 1986. Machover studied with Elliott Carter and Roger Sessions at The Juilliard School and was the first Director of Musical Research at Pierre Boulez's IRCAM in Paris. He has been Professor of Music and Media at the MIT Media Lab since it was founded in 1985, and is Director of the Lab's Hyperinstruments and Opera of the Future Groups. Since 2006, Machover has also been Visiting Professor of Composition at the Royal Academy of Music in London.

Tod Machover has invented many new technologies for music, most notably his Hyperinstruments that use smart computers to augment musical expression and creativity. He has designed these hyperinstruments for some of the world's greatest musicians, from Yo-Yo Ma to Prince, as well as for the general public and for children, as in his Toy Symphony project (www.toysymphony.net) - called "a vast, celebratory ode to the joy of music and its power to bring young and old together, diversity into unity (The Boston Globe)" - which has been touring worldwide since 2002. In addition, the music composition software Hyperscore - originally developed by his team at the MIT Media Lab for children in the context of Toy Symphony - is fast gaining worldwide recognition as a popular creative tool for people of all ages and backgrounds.

Machover has been particularly noted for his operatic compositions, which include: VALIS (1987), a science fiction opera - called 'the first opera of the 21st century' by The New York Times - commissioned for the tenth anniversary of the Centre Georges Pompidou; Media/Medium (1994), a "magic" opera for magicians Penn & Teller; the audience-interactive Brain Opera (1996/8), commissioned for the first Lincoln Center Festival, toured worldwide, and permanently installed at the Haus der Musik in Vienna since 2000; and Resurrection (1999), based on Tolstoy's last novel and commissioned by Houston Grand Opera. In addition, Machover has created numerous large-scale music installations for the general public, including the building-size underground art experience Meteorite (2000-2005) in Essen, Germany, a collaboration with media entrepreneur Andre Heller. He is currently working on a robotic opera, Death and the Powers, in collaboration with poet/librettist Robert Pinsky and director Diane Paulus, which will premiere in Monaco in September 2009

Machover's new opera, Skellig (based on the best-selling novel by David Almond), premieres in November 2008 at the Sage Gateshead (Newcastle, UK) which commissioned the work.

Would it be hyperbolic to suggest you’ve never see anything quite like this? I don’t think so. Here’s the deal: Simon Powers is the central character of Tod Machover’s “Death and the Powers: The Robots’ Opera,” up at the Cutler Majestic Theatre Tuesday March 22 & Friday March 25. Like many of us, Powers isn’t too crazy about dying. But Powers, in his 60s and facing the final (or is it?) curtain would like to keep on going in some manner.

Tod Machover’s new sci-fi opera, “Death and the Powers,’’ sets its gaze on subjects both ancient and ultra-modern. In the former camp is the question of whether the soul, or something beyond the body, can live after our death. In the latter camp is the question of the deeper meanings of our infatuation with technology — the way we experience our lives increasingly through its prism.

Maddalena, who recently reprised his performance in the title role of Nixon in China at the Metropolitan Opera, created the role of inventor Simon Powers in the world premiere of Death and the Powers at l’Opéra de Monte-Carlo last September. He returns for the A.R.T. production, which will run through March 25.

Tod Machover’s commute from his home in Waltham to the MIT Media Lab might as well be done in a souped-up DeLorean.

The composer and music technology innovator drives from his home, an 18th-century farm next to the Lyman Estate, to the state-of-the-art lab, where some of the most cutting-edge technology is being developed.

It’s not surprising, then, that Machover would be the first to incorporate fully functional robots into the old-world medium of opera in his latest production, “Death and the Powers,” set for its U.S. debut tonight at the Cutler Majestic Theater in Boston.

Several months ago, during a rehearsal for “Death and the Powers: The Robots’ Opera,’’ a robot began to throb, vibrate, and power down.

A programmer ran onstage with a screwdriver, aiming to fix the machine. But the opera’s director, Diane Paulus, had a different response. She was thrilled. During that moment of unpredictability, the robot had behaved like an actor.

On Sunday, the Ditson Festival of Contemporary Music’s last pair of concerts at the ICA began with two people and finished with over sixty, in a glass box on the harbor. The former were Matt Haimovitz, on cello, and Geoff Burleson, on (and in) piano. Children standing on the postmodern boardwalk outside pressed their faces against the window as Burleson hit keys with one hand and reached in with the other to pluck at the piano’s viscera, as Augusta Read Thomas’s Cantos for Slava (2008) required.

The music on this disc is so good, you’d be tempted to proclaim it one of the best new-music discs of the decade were the pieces not 10 or more years old.

The M.I.T-based Machover spent the late 80’s and early 90’s developing hybrid electronic instruments, though this disc shows his greatest talent is that of a composer. More than Pierre Boulez, Machover composes for electronically generated sound as if it were his first language.

Tod Machover’s Hyperstring Trilogy, on the Oxingale label and by some distance the most exhilarating disc release of these otherwise drab summer months, sets off memories of the not-too-distant past and stirs up all kinds of hopes for a not-too-hopeless future.