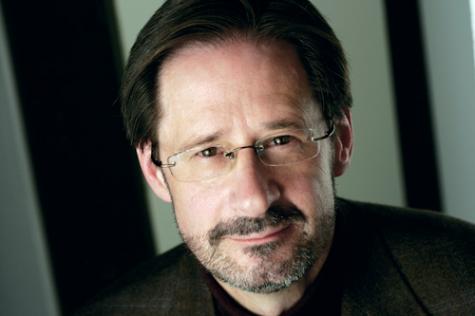 Composer Steven Stucky was the recipient of numerous commissions from orchestras, performing groups, individuals, and foundations both at home and abroad.

Mr. Stucky's extensive catalogue of compositions ranges from large-scale orchestral works, including the Second Concerto for Orchestra, winner of the Pulitzer Prize, to a cappella miniatures for chorus, an eight-minute work for five percussionists, solo piano pieces, and music for such ensembles as piano quartet, string quartet, wind quintet, voice and piano, and saxophone and piano. He was also active as a conductor, writer, lecturer, and teacher, and for 20 years pursued the longest-standing relationship between a composer and an American orchestra: In 1988, André Previn appointed him Composer in Residence of the Los Angeles Philharmonic, and he continued on to the position of LAP's Consulting Composer for New Music, working closely with Music Director Esa-Pekka Salonen on contemporary programming, the awarding of commissions, educational projects for school children, and programming for nontraditional audiences.

As an active teacher and mentor to young composers, Steven Stucky sat on the Warsaw jury of the Witold Lutoslawski Competition for Composers. He was a world-renowned expert on the late composer's music and the recipient of the Lutoslawski Society's medal. He participated in residencies at the American Academy in Rome, Princeton University's Composition Colloquium, James Madison University, and Grinnell College.

Steven Stucky was Composer in Residence of the Aspen Music Festival and School in 2001 and director of the Aspen Contemporary Ensemble in 2005. He was Chairman of the Board of the American Music Center, and was the first annual Barr Institute Composer Laureate at the University of Missouri at Kansas City. Among his other honors were a Guggenheim Fellowship, a Bogliasco Fellowship, the Goddard Lieberson Fellowship of the American Academy of Arts and Letters, the ASCAP Victor Herbert Prize, and fellowships from the National Endowment for the Arts, the American Council of Learned Societies, and the National Endowment for the Humanities. His first Concerto for Orchestra was one of two finalists for the 1989 Pulitzer Prize in Music. Mr. Stucky taught at Cornell University, where he chaired the Music Department from 1992 to 1997 and served as Given Foundation Professor of Composition. He also held the positions of Visiting Professor of Composition at the Eastman School of Music and Ernest Bloch Professor at the University of California, Berkeley.

Born November 7, 1949, in Hutchinson, Kansas, Mr. Stucky was raised in Kansas and Texas. He studied at Baylor and Cornell Universities with Richard Willis, Robert Palmer, Karel Husa, and Burrill Phillips. He passed away on February 14, 2016 at his home in Ithaca, NY.