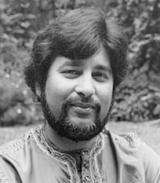 Pandit Samir Chatterjee travels widely across the world in numerous festivals throughout the year performing as a soloist or with other outstanding musicians from both Indian and Western traditions. His compositions are widely acclaimed as well as his writings.

Pandit Chatterjee began his studies early with Pandit Bankim Ghosh, Pandit Balaram Mukherjee, Pandit Rathin Dhar, and Mohammad Salim. His later formation as a musician occurred under the guidance of Pandit Amalesh Chatterjee (since 1966) and Pandit Shyamal Bose (since 1984). All of Pandit Chaterjee's teachers have been from the Farrukhabad Gharana (school) of tabla playing, which he now represents.

Pandit Chatterjee has been teaching for the last 25 years and many of his students are established performers. He is the Founder-Director of Chhandayan, an organization dedicated to promoting and preserving Indian music and culture by conducting classes and workshops, organizing concerts, maintaining a library, and running a store.

Pandit Chatterjee also has a career as a musicologist and journalist, contributing to many different newspapers and periodicals. He won the gold medal for his proficiency in a musical examination that is equivalent to a Bachelor of Music degree. He has two Masters degrees to his credit, in English and in History.