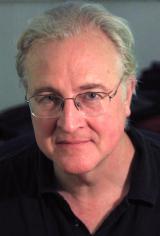 Paul Moravec, recipient of the 2004 Pulitzer Prize in Music, has composed numerous orchestral, chamber, lyric, and operatic works. His music has been described as "tuneful, ebullient and wonderfully energetic" (San Francisco Chronicle), "riveting and fascinating" (NPR), and "assured, virtuosic" (The Wall Street Journal). Frequently commissioned by notable ensembles and major music institutions, Mr. Moravec's current project is The Shining, based on the Stephen King novel, premiering at Minnesota Opera in 2016. His recent premieres include a Violin Concerto with violinist Maria Bachmann and Symphony in C; The King's Man, with Kentucky Opera; Amorisms, with Alias and the Nashville Ballet, and a Piano Quintet, with Jeremy Denk and the Lark Quartet.

A graduate of Harvard and Columbia universities, he is University Professor at Adelphi University, and recently served as Artist-in-Residence at the Institute for Advanced Study in Princeton as well as Composer-in-Residence at the American Academy in Rome. Other honors include the Rome Prize, a Guggenheim Fellowship, three awards from the American Academy of Arts and Letters. Recent CD releases include four albums on Naxos and an album of orchestral music on BMOP/sound titled Northern Lights Electric.

His website is paulmoravec.com and his works are published by subitomusic.com.

Paul Moravec’s music, for me, is consistently bracing, exhilarating and entertaining. His music is written in a style and language that speaks to the logical continuation of some of the great American masters; such as Copland, Schuman and Thomson. He has written in every genre including some recent outstanding contributions to opera. Moravec won the Pulitzer Prize in 2004 for the Tempest Fantasy, a chamber quartet I personally love!

With these two recent releases from BMOP/sound we get an attractive bouquet of concertos from a couple of America's most highly regarded contemporary composers, Thomas Oboe Lee (b. 1945) and Paul Moravec (b. 1957, see below). Lee was born in China but left there with his family in 1949, spending ten years in Hong Kong and another six in Brazil. He then emigrated to the United States in 1966, where he pursued extensive musical studies, graduating from Harvard in 1981. He's received a number of outstanding awards, and now teaches at Boston College.

On Sunday, the Ditson Festival of Contemporary Music’s last pair of concerts at the ICA began with two people and finished with over sixty, in a glass box on the harbor. The former were Matt Haimovitz, on cello, and Geoff Burleson, on (and in) piano. Children standing on the postmodern boardwalk outside pressed their faces against the window as Burleson hit keys with one hand and reached in with the other to pluck at the piano’s viscera, as Augusta Read Thomas’s Cantos for Slava (2008) required.