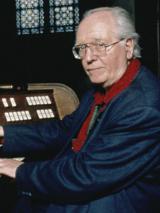 Olivier Eugène Prosper Charles Messiaen (10 December 1908 – 27 April 1992) was a French composer, organist, and ornithologist who was one of the major composers of the 20th century. His music is rhythmically complex; harmonically and melodically he employs a system he called modes of limited transposition, which he abstracted from the systems of material generated by his early compositions and improvisations. He wrote music for chamber ensembles and orchestra, vocal music, as well as for solo organ and piano, and also experimented with the use of novel electronic instruments developed in Europe during his lifetime.

Messiaen entered the Paris Conservatoire at the age of 11 and was taught by Paul Dukas, Maurice Emmanuel, Charles-Marie Widor and Marcel Dupré, among others. He was appointed organist at the Église de la Sainte-Trinité, Paris, in 1931, a post held for 61 years until his death. He taught at the Schola Cantorum de Paris during the 1930s. After the fall of France in 1940, Messiaen was interned for nine months in the German prisoner of war camp Stalag VIII-A, where he composed his Quatuor pour la fin du temps ("Quartet for the end of time") for the four instruments available in the prison—piano, violin, cello and clarinet. The piece was first performed by Messiaen and fellow prisoners for an audience of inmates and prison guards. He was appointed professor of harmony soon after his release in 1941 and professor of composition in 1966 at the Paris Conservatoire, positions that he held until his retirement in 1978. His many distinguished pupils included Iannis Xenakis, George Benjamin, Alexander Goehr, Pierre Boulez, Tristan Murail, Karlheinz Stockhausen, and Yvonne Loriod, who became his second wife.

Messiaen perceived colours when he heard certain musical chords (a phenomenon known as synaesthesia); according to him, combinations of these colours were important in his compositional process. He travelled widely and wrote works inspired by diverse influences, including Japanese music, the landscape of Bryce Canyon in Utah, and the life of St. Francis of Assisi. For a short period Messiaen experimented with the parametrisation associated with "total serialism", in which field he is often cited as an innovator. His style absorbed many global musical influences such as Indonesian gamelan (tuned percussion often features prominently in his orchestral works).

He found birdsong fascinating, notating bird songs worldwide and incorporating birdsong transcriptions into his music. His innovative use of colour, his conception of the relationship between time and music, and his use of birdsong are among the features that make Messiaen's music distinctive.