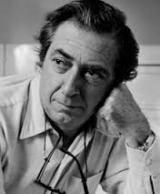 Norman Dello Joio (1913-2008) was born in New York, where his father, his grandfather and his great grandfather were church organists. Dello Joio acquired skill as an organist and pianist at home from his father, Casimiro Dello Joio, from 1918 to 1930. He took additional organ lessons from his well-known godfather, Pietro Alessandro Yon (musical director and organist at St. Patrick’s Cathedral) during the years 1931 to 1933; and studied piano with Gaston Déthier at the Institute of Musical Art (1933 - 1938). From 1939 to 1941 he studied composition with Bernard Wagenaar at the Juilliard School of Music (1939-1941). In 1941 he enrolled in the summer class of composition led by Hindemith at the Berkshire Music Center in Tanglewood; and then continued to attend Hindemith’s courses at Yale University from 1941-1943.

From the beginning of his career he received a number of grants and awards, and his works had regular performances. He won an Elizabeth Sprague Coolidge Award for his Piano Trio (1937), a Town Hall Composition Award for the orchestral work
Magnificat (1942), and Guggenheim Fellowships (1943 and 1944). In 1945 he received a grant from the American Academy of Arts and Letters. His Variations, Chaconne and Finale, first performed by the New York Philharmonic Orchestra under Bruno Walter, won the New York Music Critics’ Circle Award for the best new orchestral piece (1948); he won a second Critics’ Circle Award (1962) for the opera The Triumph of St. Joan. The Pulitzer Prize for music was awarded to him in 1957 for Meditations on Ecclesiastes for string orchestra. On February 16, 1958, he was the subject of a CBS television documentary titled Profile of a Composer. In 1961 he was elected to the National Institute of Arts and Letters. In 1965, his music for the NBC program The Louvre won the Emmy award for outstanding television score.

As music director for the Dance Players Company (1940 - 1943), Norman Dello Joio began to extend his influence into the world of dance. Some of his most considerable works for dance include On Stage! (1945), choreographed by Michael Kidd for Ballet Theatre, two works for Martha Graham, Diversion of Angels (1948) and Seraphic Dialogue (1955), and There is a Time (1956; a composition based on the Pulitzer Prize winning Meditation On Ecclesiastes for José Limón).

Dello Joio taught composition and choir at Sarah Lawrence College (1945 - 1950), composition at the Mannes College of Music (1960 - 1972), and was Professor of Music and Dean of the Fine and Applied Arts School of Boston University (1972 - 1977). From 1959 until 1973, he directed the Ford Foundation’s Contemporary Music Project, which placed young composers in high schools. The purpose of the project was to make contemporary music a part of children's lives by placing composers and performers in the learning atmosphere. The project placed about ninety composers, many who successfully continued their careers.