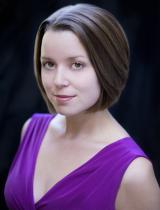 Soprano Margot Rood brings her luminous tone and superb musicality to repertoire ranging from baroque opera to American musical theatre to music of the 21st century.

Ms. Rood's appearances on the concert platform have delighted audiences and garnered critical acclaim from national journals. Ms. Rood's 2011-2012 season includes her debut with Boston Modern Orchestra Project performing as soloist in Kati Agocs' Vessel and as soprano evangelist in Pärt's Passio Domini Nostri Jesu Christi secundum Joannem, her debut with Back Bay Chorale as soprano soloist in Bach's St. John Passion conducted by Scott Allen Jarrett, and an engagement as soloist in Brahms' Ein Deutsches Requiem with Concord Chorus, conducted by Michael McGaghie. In the spring of 2011, the soprano made her Carnegie Hall debut in the world premiere of Shawn Jaeger's Letters Made with Gold, as part of the Dawn Upshaw/Donnacha Dennehy Composing Song Workshop. Steve Smith of The New York Times praised her performance for its "luminosity and grace". In 2010, she made her Boston concert stage debut as the Jungfrau in Schumann's Das Paradies und die Peri with Marsh Chapel Choir and Collegium at Boston University, followed by her Boston Symphony Hall debut as Soloist/Miriam in Handel's Israel in Egypt with the Handel and Haydn Society under the baton of Harry Christophers. "Margot Rood hushed the audience with her fresh, open tone and glowing, focused pitch," raved Harlow Robinson of The Boston Globe. Other recent solo appearances include: the world premiere in New York City of Quick Study, a song cycle for soprano, flute, percussion and piano by Matthew Ricketts and as soprano soloist in Handel's Dixit Dominus with Handel and Haydn Society.

Equally comfortable on the opera stage, Ms. Rood will make her company debut this season with Opera Boston, covering the role of Héro in Opera Boston's new production of Berlioz's Béatrice et Bénédict, conducted by Gil Rose. The soprano's 2010-2011 season featured a return to St. Petersburg Opera (FL) where she performed Fredrika Armfeldt in Sondheim's A Little Night Music and a return to Green Mountain Opera Festival to cover Frasquita in Bizet's Carmen and sing Despina in Mozart's Così fan tutte. Her 2009-2010 season saw Ms. Rood in two auspicious company and role debuts, first as Little Red Riding Hood in Sondheim's Into the Woods with St. Petersburg Opera, and then as Dorinda in Handel's Orlando with Green Mountain Opera Festival. Of her performance in Orlando, the Times Argus wrote, "Soprano Margot Rood gave Dorinda a natural innocence and sang with crystalline lyricism."

Ms. Rood received her Masters in Music from McGill University in Montreal, Quebec, studying voice with renowned baritone Sanford Sylvan. With Opera McGill, Ms. Rood performed a diverse array of principal roles including: Emmie in Britten's Albert Herring, Oberto in Handel's Alcina, Aeglé in Lully's Thesée and Lucia in Britten's The Rape of Lucretia. While still a student at McGill, Ms. Rood fostered a relationship with the Janiec Opera Company at Brevard Music Center, with whom she sang the roles of Yum-Yum in Sullivan's The Mikado, Minnie Fay in Jerry Herman's Hello Dolly, Suor Genovieffa in Puccini's Suor Angelica and excerpts from the world premiere of Tony Solitro's Maya Awake over the course of the 2008 and 2009 summer seasons.