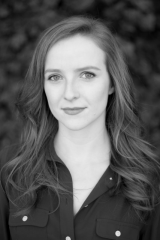 Rising coloratura soprano Leah Brzyski is quickly establishing herself as a noteworthy performer throughout the United States.
This season, Ms. Brzyski joins Minnesota Opera’s Resident Artist Program to sing the role of Miss Wordsworth in Albert Herring. She returns next season to sing the roles of Frasquita in Carmen and Jeannette in Joseph Bologne’s The Anonymous Lover.
A recent graduate of the prestigious Yale University, she was seen in the roles of Königin der Nacht in Die Zauberflöte, Sandmädchen and Taumädchen in Hänsel und Gretel, and as the title role in Stravinsky’s Le Rossignol. In 2020, Ms. Brzyski made her debut with Bel Cantanti Opera and Opera Ithaca as the leading roles in Don Pasquale and Cendrillon (Viardot). She has also performed as a soloist with esteemed companies including the Detroit Symphony Orchestra, the Lansing Symphony Orchestra, Opera Grand Rapids, Orchestra New England, and The New Haven Symphony Orchestra.

Attracting praise for her versatility, Ms. Brzyski is also a passionate performer of contemporary opera. She premiered works for the Pulitzer Prize nominated composer Ricardo Zohn-Muldoon in the opening year of the VIPA Festival (Valencia, Spain) and will premiere one of his newest compositions in 2021 with the Cygnus Ensemble in New York. She will then make her international debut as a soloist at the Beijing Modern Music Festival. Last season, Ms. Brzyski joined Bel Cantanti Opera to create the role of Sylvestra in the debut of Frances Pollock’s new opera, Briscula.

Ms. Brzyski has been seen as a Young Artist with Central City Opera, Utah Festival Opera, and Charlottesville Opera. This year she joins the Santa Fe Opera Apprentice Program where she will cover the role of Tytania (A Midsummer Night’s Dream) and premiere the role of Agave in Corigliano’s new opera The Lord of Cries.