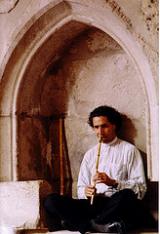 Khosrow Soltani was born in Teheran, and has been living in Austria since 1974. He studied in Teheran's conservatory and finished his degree as a bassoonist in 1971. From 1971 and 1974 he played bassoon as a regular member of the Teheran Symphony Orchestra. In October 1974 he began his bassoon studies at the Hochschule fuer Musik und Darstellende Kunst in Vienna, Austria, with Karl Oelberger. Three years later, he finished his degree with honors. Since 1976 he has been a member of the Viennese ensemble of early music Les Menestrels. He has also recorded and toured the United States and Canada with the Clemencic Consort and Musica Antiqua Wien. On recorder, he studied with Hans Maria Kneihs, finishing his degree in 1984.

Mr. Soltani began performing the Persian ney in 1979, and has performed the ney in many different ensembles. In 1984 he founded Shiraz, an ensmble for Persian music, with which he has played many concerts at various European festivals. In addition he has recorded for the WDR, the NDR, and Franc Musiq, among others.