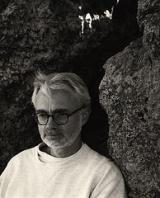 One of America's most admired and frequently performed composers, John Adams was born in Worcester, Massachusetts, in 1947. After graduating from Harvard University in 1971, he moved to California, where he taught and conducted at the San Francisco Conservatory of Music for ten years. His innovative concerts led to his appointment firstly as contemporary music adviser to the San Francisco Symphony and then as the orchestra's composer-in-residence between 1979 and 1985, the period in which his reputation became established with the success of such works as Harmonium and Harmonielehre. Recordings on the New Albion and ECM labels were followed in 1986 by an exclusive contract with Nonesuch Records, an association that continues today.

In 1985 Adams began a collaboration with the poet Alice Goodman and stage director Peter Sellars that resulted in two operas, Nixon in China and The Death of Klinghoffer, worldwide performances of which made them among the most performed operas in recent history. A third stage work, I Was Looking At The Ceiling And Then I Saw The Sky, a "song play" with libretto by the poet June Jordan, was also staged in more than fifty performances in both the US and Europe. His most recent stage project, El Niño, a further collaboration with Peter Sellars, was premiered in Paris in December 2000 and further performances took place in San Francisco in January 2001.

Adams's works have received numerous awards, among them the 1994 Royal Philharmonic Society Award for his Chamber Symphony, and the 1995 Grawemeyer Award for his Violin Concerto.

In 2002 Adams composed On the Transmigation of Souls for the New York Philharmonic, a work written in commemoration of the first anniversary of the World Trade Center attacks. This work received the 2003 Pulitzer Prize for Music.

Adams most recent work is My Father Knew Charles Ives, a musical self-portrait of the composer's childhood in Concord, NH, where he played in marching bands with his father and first heard live jazz in the summer dance hall owned by his grandfather. The work was premiered in April of 2003 by Michael Tilson Thomas and the San Francisco Symphony.

In April and May of 2003 Lincoln Center presented a fesitval entitled "John Adams: An American Master," the most extensive festival ever mounted at Lincoln Center devoted to a living composer.

Among the significant events of the 2003 season has been the unveiling of new filmed version of The Death of Klinghoffer, Adams's second opera, directed by Penny Woolcock for Channel Four. The film, shot on location in the Mediterranean and on board a cruise liner, breaks new ground in the presentation of opera on film. The composer conducts the London Symphony Orchestra in this film which had its American premiere at the Sundance Festival and played at other international festivals in Rotterdam, Buenos Aires, San Francisco and New York.

In September of 2003 Adams will succeed Pierre Boulez as Composer-in-Residence at Carnegie Hall. Among his activities there will be the planning and directing of concerts in the new 600-seat Zankel Hall.

Adams is the subject of two documentary films, one by Tony Palmer, entitled Hail Bop!, (1998) and a more recent one by David Jeffcock (2003). After a successful run of Nixon in China at the English National Opera in 2000, a new film of that opera, directed by Peter Sellars is to be made in January of 2004.

Future projects include The Dharma at Big Sur (composed for the Los Angeles Philharmonic and the opening of the Walt Disney Concert Hall in Los Angeles in October of 2003); a new opera, working title: Doctor Atomic, based on the life of Robert Oppenheimer, commissioned by the San Francisco Opera for premiere in September of 2005, and a new orchestral work for Simon Rattle and the Berlin Philharmonic, due in early 2006.

In celebration of a fifteen-year partnership, in 1999 Nonesuch Records released The John Adams Earbox, a 10-CD compilation comprising almost all of the composer's music over a twenty year period.

Adams continues to conduct regularly, appearing with the world's greatest orchestras, and with programs combining his own works with composers as diverse as Debussy, Stravinsky, and Ravel, to Zappa, Ives, Reich, Glass, and Ellington. In recent seasons he has conducted the Chicago and San Francisco Symphonies, the Los Angeles Philharmonic, the Cleveland, Montreal, and Philadelphia Orchestras, the St. Paul Chamber Orchestra, and the New York Philharmonic. European engagements have included performances with the Deutsche Kammerphilharmonie, Ensemble Modern, Oslo Philharmonic, Deutsches Symphonie-Orchester Berlin, Concertgebouw, Santa Cecilia, and London Symphony Orchestra. He is a regular guest at the BBC Proms concerts and will perform there with pianist Helene Grimaud during their 2003 season. Future appearances this season include concerts with the Seattle Symphony, the BBC Symphony, The Hessischer Rundfunk and the Finnish Radio Orchestra.

The Boston Modern Orchestra Project (BMOP) kicked off its season with a Jordan Hall program on November 13. Entitled “Virtuosity’s Velocity,” the concert was devoted to five American works for chamber orchestra. The music was demanding and difficult, but conductor Gil Rose did indeed elicit plenty of virtuosity from his ensemble.

For its seasonal opener “Virtuosity’s Velocity,” on Saturday, November 13 at Jordan Hall, the Boston Modern Orchestra Project chose to present an all-American program in a chamber-orchestra size. (In the old days, there were more players on stage than audience members.) The program included works by John Coolidge Adams, Arthur Berger, Ross Lee Finney, and Scott Wheeler. All these composers except Wheeler flirted with serial techniques, only to abandon them later.

For its season-opening concert, “Virtuosity’s Velocity,” the Boston Modern Orchestra Project trained its sights on the chamber orchestra — an ensemble whose unique flexibility can incorporate the weight and timbral range of the orchestra and the responsiveness of chamber music. All the music was American, creating a sort of microhistory of the genre’s many iterations.

The music was demanding and difficult, but conductor Gil Rose did indeed elicit plenty of virtuosity from his ensemble.