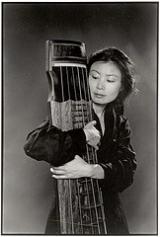 Jin Hi Kim is highly acclaimed as both an innovative komungo (Korean 4th century fretted board zither) virtuoso and for her cross-cultural compositions. Kim has introduced the Korean indigenous komungo for the first time into Western contemporary music scene with her wide array of pioneering compositions for chamber ensemble, orchestra, avant-garde jazz improvisations, and multicultural ensembles. She has co-designed the world's only electric komungo.

Kim's recent work One Sky for electric komungo and string chamber orchestra, commissioned by Great Mountains Music Festival, was premiered by the festival orchestra and Kim at the Demilitarized Zone (DMZ) between North and South Korea in August 2005. Kim was featured on BBC The World/Global Hit radio program about the premier, and Kim's One Sky was broadcast on KBS-TV.

Kim was featured at Haus der Kulturen der Welt (Berlin) for Transonic Festival 2004, and she performed her innovative solo works for komungo and electric komungo as well as her Nong Rock, performed by Kairos String Quartet and Kim. Sanjo Ecstasy, conceived by Kim, for electric komungo, kayagum, haegum, janggo, Western drum set, and a shaman trance dancer, was premiered at the Sanjo Festival in Jeonju, South Korea in 2003, in following her appearance in the MBC-TV national broadcast of the film 100 Years of Sanjo. Kim was awarded the 2000-2001 American Composers Orchestra Composer Fellowship, for her commissioned Eternal Rock for Orchestra and komungo premiered at Carnegie Hall with the American Composers Orchestra. Eternal Rock II for orchestra and solo percussionist is commissioned by Boston Modern Orchestra and will be premiered on March 10, 2006.

Kim's komungo solos, Komungo Meditation, represent an evolution of the instrument into the twenty-first century, a development she has pursued over twenty-five years. Her new komungo music is imbued with meditative and vivid energy that makes it mesmerizing. She has performed extensively throughout the USA, Europe, Canada, South America, Asia, Australia, New Zealand, and Russia.

Kim has created the live interactive pieces for electric komungo and MIDI computer system. Using MAX/MSP, the komungo sound is processed through a personal computer program in live that is triggered by MIDI foot pedal. Staying true to the nature of the instrument, her solo interweaves from old timeless mind to space-age blips.

Peter Watrous of The New York Times wrote, "virtuoso, Jin Hi Kim promises thoughtful, shimmering East-West amalgams in combinations that are both new and unlikely to be repeated."

Joseph McLellan of The Washington Post wrote, "Her unique vision blends science fiction images, state-of-the-art technology, ancient mythology and timeless music and dance traditions. No other artist is doing work quite like this, and she does it with superb style. Kim performs brilliantly and evocatively on an amplified komungo."

Deborah Jowitt of The Village Voice wrote, "It's wonderful to see these diverse Asian styles converse. All the movements are grounded, yet how differently shaped and accented, how diverse the way feet strike the floor. In Kim's score, the styles of the master musicians actually merge."

Over twenty years Kim has developed a series of compositions, Living Tones --The timbral persona of each tone generated is treated with an abiding respect, as its philosophical mandate from Buddhism, a reverence for the 'life' of a tone, the color and nuance granted each articulation from Korean Shamanism. Kim has appeared as a soloist for the Living Tones compositions with American Composers Orchestra, Boston Modern Orchestra, Key West Symphony, KBS Symphony (Korea), Kronos Quartet, Chamber Music Society of Lincoln Center, Xenakis Ensemble (Holland), Kairos String Quartet (Berlin) and others.

Josef Woodard of The Los Angeles Times wrote, "[Living Tones] is new music/world music at its finest, beyond political correctness into the realm of the sublime, where words and cultural postures fall away."

Allan Kozinn of The New York Times wrote, "A gorgeously tactile piece that moved easily between an earthy folksiness and meditative refinement."

Kim received the Award for Music Composition from the Foundation For Contemporary Performance Art which was created by John Cage and Jasper Johns to support innovative creative work in the arts. She is a recipient of the residence fellowship for the Rockefeller Foundation Bellagio Center, Italy, and the Asian Cultural Council fellowship in Japan.

Korean National Broadcasting System (KBS-TV) premiered an hour documentary film on Kim's musical contribution. She has appeared for interviews on WNYC and PBS in New York; CPTV and WNPR in Connecticut; KPFA and KQED in San Francisco; RAI in Rome, Italy; ABC in Sydney, Australia; DRS in Switzerland; KCUR in Montreal; CBC-TV in Vancouver; VPRO in Holland, and many others.

Kim studied and practiced traditional music with masters from National School for Korean Traditional Music, which is affiliated with the Ministry of Culture. She earned a BA degree in Korean traditional music at Seoul National University before coming to the United States. Subsequently, she studied with composer John Adams, Lou Harrison, Terry Riley and David Rosenboom, and received an MFA in electronic music/composition at Mills College, CA.