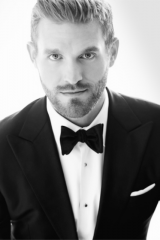 American baritone Jarrett Ott, whom Opera News names one of its twenty-five “Rising Stars” and called “a man who is seemingly incapable of an unmusical phrase,” is enjoying an international career at the age of 34. In the 2021-2022 season, Mr. Ott will make house debuts with Bayerische Staatsoper as Dandini in La Cenerentola, and with both Opéra de Lille and the Grand Théâtre de Luxembourg as Aeneas in Dido and Aeneas, the latter conducted by Emmauelle Haïm. He will also return to the Staatstheater Stuttgart as Sharpless in Madama Butterfly, Figaro in Il barbiere di Siviglia, and Faust in Schumann’s Scenes from Goethe’s Faust, as well as North Carolina Opera as Marcello in La bohème. Finally, he will be a featured soloist alongside Emmauelle Haïm and Le Concert d’Astrée for a gala event at the Théâtre des Champs-Elysées in Paris and at the Staatsoper Berlin.

Cancelations due to the Covid-19 pandemic included Papageno in Die Zauberflöte with the Komische Oper Berlin on tour in Chile, Valentin in Faust with the Staatstheater Stuttgart, and the title role in David Lang’s prisoner of the state with Operadagen Rotterdam. In the 2020-2021 season, Mr. Ott performed Aeneas with the Grand Théâtre de Genève, and created the role of John Seward in John Corigliano and Mark Adamo’s The Lord of Cries with Santa Fe Opera. Finally, he performed a virtual presentation Jake Heggie’s one-act opera For a Look or a Touch in Seattle with Music of Remembrance.