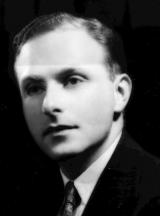 Irving Fine's music, wrote Aaron Copland, "wins us over through its keenly conceived sonorities and its fully realized expressive content"; Copland also singled out its "elegance, style, finish and a convincing continuity," its overarching lyricism summed up in Virgil Thomson's description of its "unusual melodic grace."

Irving Fine was born in Boston, Mass., on 3 December 1914 and first studied piano; he was an admired pianist throughout his career, and was particularly esteemed by colleagues for his sight-reading ability. Fine went to Harvard University, attending the composition and theory classes of Edward Burlingame Hill and Walter Piston; he received his BA in 1937 and his MA a year later; at Harvard he also studied choral conducting with Archibald T. Davidson and, at Tanglewood, orchestral conducting with Serge Koussevitzy. In 1938-39 he attended Nadia Boulanger's composition classes at Fontainebleau, outside Paris, and at Radcliffe College, Cambridge (Mass.).

Fine's connection with Harvard continued in 1939, when he became a member of the Music Department. He was appointed Assistant Professor in 1945 and stayed there until 1950; from 1939-45 he was also Assistant Conductor of the Harvard Glee Club. At Harvard he was closely associated with Aaron Copland, Igor Stravinsky, Koussevitzky and Leonard Bernstein. In 1950 Fine took up a chair at Brandeis University, where he taught until 1962 when, on 23 August, he was felled by a fatal heart-attack.

Fine's music initially shows the impress of Stravinsky's neo-classicism - Fine himself described his Violin Sonata of 1946 as "essentially tonal, diatonic, moderately dissonant, neo-Classic in its formal approach". Among the other works which best exemplify these qualities are the Music for Piano of 1947, the Partita for wind quintet of 1948 and, perhaps the best-known of these early scores, the vigorous, rhythmically outgoing Toccata Concertante for orchestra of 1947.

A more Romantic element combined with Fine's essential lyricism from around 1950 onwards, most notably in the Notturno for strings and harp of 1950-51 and the Serious Song (subtitled "A Lament for String Orchestra") of 1955. An interest in the twelve-tone system began to colour his music during the 1950s, but Fine never went all the way towards serialism; instead, it allowed him to accommodate a higher degree of dissonance in his music without compromising its textural clarity. All these influences combined in his final and most important work, the Symphony of 1962 (an opera and a violin concerto were unfinished at the time of his death). The Symphony has a powerful onward thrust, animated by jagged, driving rhythms and bold, confident gestures. Fine conducted its premiere less than two weeks before he died.

Irving Gifford Fine (1914-1962) was an American composer. Born in Boston, Massachusetts, Fine studied with Walter Piston at Harvard earning Bachelor’s and Master’s degrees. He studied conducting with Serge Koussevitsky and composition with Nadia Boulanger. At the time of his death at age 47 he completed only a handful of works for orchestra, chorus and various chamber ensemble and solo works. But what he lacked in quantity did not lack in quality. The Irving Fine Society maintains a very useful web page which can be found here.

To celebrate Irving Fine’s centennial, Gil Rose and the Boston Modern Orchestra Project offered music by the composer and his Brandeis contemporaries, Arthur Berger and Harold Shapero. But the centerpiece of this May concert was Fine’s Symphony of 1962, one of the noteworthy symphonies of the twentieth century. BMOP’s spectacular performance of the work showed why that is the case. (AK)

As usual the BMOP under Gil Rose turn in fantastic performances.