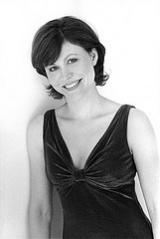 Elizabeth Weigle has earned critical acclaim for her unique vocal beauty, savvy musicianship, and dramatic skill, which she lends to a wide variety of musical styles ranging from the Baroque through the 21st century. She has collaborated with some of the finest contemporary music ensembles in the United States, including Speculum Musicae, New Music Consort, and Kristjan Järvi's Absolute Ensemble. With the latter, she performed and made a world debut recording of the chamber music version of Mahler's Symphony No. 4, and also premiered Charles Coleman's Nine By Dickinson (another work written for her) at New York's Merkin Concert Hall. Her other new music performances include Oliver Knussen's Hums and Songs of Winnie the Pooh on the Making Music series at Carnegie Hall's Weill Recital Hall—a work she has also sung at the Tanglewood Music Festival. Ms. Weigle was a featured soloist at the Bowdoin Music Festival, where she gave the world premiere of Vineet Shende's, Sonetos de Amor, (which she recently recorded), as well as Harbison's Simple Daylight and Berio's Folksongs.

On the operatic stage, Ms. Weigle received critical acclaim for her role as Pat Nixon in John Adams's Nixon in China with Opera Boston and the Boston Modern Orchestra Project, where she was hailed by The Boston Herald as "a perfect Pat Nixon". The New York Times has also praised her "impressive performance as the Governess" in Benjamin Britten's The Turn of the Screw. Her other operatic roles include the world premiere of Emma in Richard Wilson's Aethelred the Unready with members of the American Symphony Orchestra at Merkin Hall, Sophie in Der Rosenkavalier (Chautauqua Orchestra), Despina in Così fan tutte (Chautauqua Opera), Singer No. 1 in Conrad Susa's Transformations (Center for Contemporary Opera, New York), and Barbarina in Nozze di Figaro (Virginia Opera). Ms. Weigle has recorded for the Nonesuch, Erato, and Albany labels.