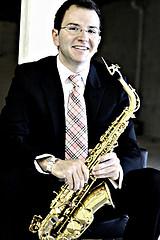 Hailed by Fanfare Magazine as a "hugely sensitive musician" and The Boston Globe as "having superior chops backed up by assured musicianship," Eliot Gattegno is the only saxophonist and one of the few Americans to ever win the "Kranichsteiner Musikpreis," widely considered the most prestigious prize for the interpretation of new music.

He also is the winner of the Tourjee Alumni Award and the John Cage Award from the New England Conservatory, the Fine Arts Award from Interlochen Arts Academy, and after a series of events including concertos, recitals, and lectures earned an special citation for cultural exchange and artistic excellence from the Brazilian Government. As winner of the Boston Modern Orchestra Project concerto competition, he performed and recorded Elliott Schwartz’s Chamber Concerto IV for a release on BMOP/Sound. These performances led the esteemed The Boston Globe music critic Richard Dyer to announce, "there is no question the future of his instrument is in safe hands."

A leading force in contemporary music, he has premiered and commissioned hundreds of compositions and has given American premieres of works by Luciano Berio, Pascal Dusapin and Morton Feldman. He has also founded several ensembles dedicated to the promotion and development of new works, including Second Instrumental Unit with David Fulmer and The Kenners with Eric Wubbels. Recently, he was appointed the Associate Director as well as saxophone soloist for Ensemble Sospeso in New York City.

In addition to his performing career, Mr Gattegno is a sought-after lecturer, teacher and chamber music coach. He is a former Artist-in-Residence at Harvard University and has presented guest lectures at the University of California, Berkeley; Columbia University; Princeton University; Stanford University; Shanghai Conservatory; and the Juilliard School. Most of these lectures present materials to act in his forthcoming series of books and Web site on contemporary instrumental pedagogy and techniques. He also serves as Executive Director of World-Wide Concurrent Premiers and Commissioning Fund, Inc. – an organization dedicated to commissioning emerging and Pulitzer Prize winning composers alike.

Mr. Gattegno is currently a Fellow at Harvard University and resides in New York City.