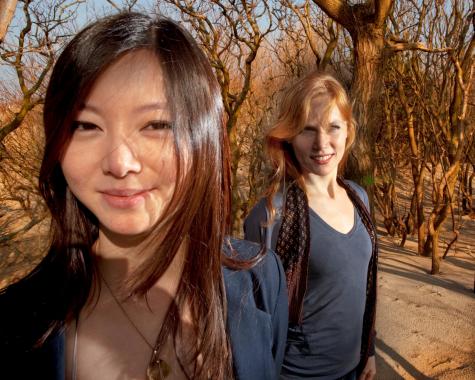 Duo X88 is a transatlantic piano duo made up of pianists Vicky Chow and Saskia Lankhoorn.

Canadian pianist Vicky Chow has been described as “brilliant” (The New York Times), “a monster pianist” (Time Out New York), and “new star of new music” (Los Angeles Times). She is the pianist for the Bang on a Can All-Stars, Grand Band, and New Music Detroit, and has collaborated with other ensembles such as the International Contemporary Ensemble. Her next solo album on New Amsterdam, titled AORTA and featuring six new works by American composers including Rome prize winners Andy Akiho and Christopher Cerrone, will be coming out in the fall of 2016. An EP of a solo piano works by Bang on a Can founder Michael Gordon titled Sonatra will also be coming out this fall on limited edition LPs under the Cantaloupe label. Frequently broadcasted on WNYC’s Q2 radio, Ms. Chow’s recorded work can be found on the Nonesuch, New Amsterdam, Tzadik, Cantaloupe, Innova, Hinterzimmer, and AltaVoz labels. Interviews and articles featuring Ms. Chow have appeared in the Huffington Post, Gramophone, The New York Times, The Vancouver Sun, and many more. Her recent recordings of Steve Reich’s Piano Counterpoint (Nonesuch) and Tristan Perich’s Surface Image (New Amsterdam Records) were included in “top albums of the year” lists of Rolling Stone, Rhapsody, and others. Her performances of Morton Feldman and John Cage were featured on BBC3’s documentary series “The Sound and The Fury,” based on Alex Ross’s book The Rest is Noise. Her next commissioning projects include works by composers Fjóla Evans, David Brynjar Franzson, Vincent Ho, and Nicole Lizée.

Having started her piano studies at age 5, Ms. Chow was invited to perform at the age of 9 at the International Gilmore Music Keyboard Festival. She made her orchestral debut at the age of 10 with the Vancouver Symphony Orchestra and made her NYC orchestral debut at Alice Tully Hall with the Juilliard Symphony performing Bartók’s Piano Concerto No. 1. Ms. Chow resides in Brooklyn. www.vickychow.com.

Versatile Dutch pianist Saskia Lankhoorn is an active soloist and chamber musician in the contemporary music scene. Originally from Almere, the Netherlands, she received her bachelor’s and master’s degrees from the Royal Conservatory of The Hague, under the guidance of Marcel Baudet and Naum Grubert, and also studied with Rudolf Jansen at the Académie de Villecroze in France as well as with Elza Kolodin in France and Freiburg. She won first prize in the National Prinses Christina Competition in 1998 and was a finalist in the Royal Concertgebouw’s 58th Vriendenkrans Competition in 2007, where her duo was honored with both the Press Prize and the Audience Award.

Saskia Lankhoorn’s dedication to performing contemporary music dates from early am age; 1995 marked her first appearance on national radio, playing Arnold Schoenberg’s Sechs Kleine Klavierstücke. Saskia performs with the Asko|Schönberg ensemble and ELECTRA, and has premiered new works with her trans-Atlantic piano duo X88 with Canadian pianist Vicky Chow. She is a co-founder of Ensemble Klang, which has performed in festivals worldwide including the Huddersfield Contemporary Music Festival, Cultural Olympiad UK 2012, and Sonic Festival in New York City.

Her critically acclaimed solo concerts, combining new art music with a strong performance and sound concept, include “Chords & Cables” (presented in spring 2014), exploring the external sound possibilities of the piano in combination with electronic and prepared sounds. Saskia performs throughout the Netherlands in venues such as the Concertgebouw and Muziekgebouw aan 't IJ in Amsterdam, as well as Symphony Space NY in the USA. She made her solo debut at the Royal Concertgebouw in October 2016. Dances & Canons, her first solo CD on ECM Records, was released in October 2014. Featuring a suite of solo piano works by Kate Moore, it was nominated for the 2015 Edison Award.