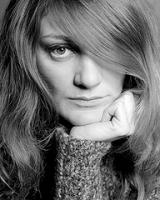 Cristina Zavalloni was born in Bologna, Italy. With her strong background in jazz, she went on to expand her studies in bel canto and in composition at the G.B. Martini Conservatory in Bologna. She also studied classical and modern dance for many years.

Primarily devoted to new music, Zavalloni collaborates closely with Dutch composer Louis Andriessen, who wrote several works for her, including Passeggiata in tram per l'America e ritorno, La Passione, Inanna, Letter from Cathy, and Racconto dall'Inferno. In 2008, she will perform a leading role in Andriessen's new opera. She has also collaborated with composer Michael Nyman, who created the piece Acts of Beauty for her, with Cornelis De Bondt, who wrote Gli Toccha la Mano for her, with Paolo Castaldi, who wrote A Fair Mask for her, and Gavin Bryars.

Zavalloni has recently immersed herself in baroque music: in 2005 she sang Drusilla in Monteverdi's Incoronazione di Poppea at Opera du Rhin de Strasbourg, directed by David McVicar and conducted by Rinaldo Alessandrini. She performed Clorinda in Combattimento di Tancredi e Clorinda at Ravello Festival, directed by Mario Martone with a musical arrangement by composer Giorgio Battistelli. In 2006, she sang the title role in Alain Platel's and Fabrizio Cassol's newest production, VSPRS, based on Monteverdi's Vespri della Beata Vergine. Throughout 2006 and 2007, Zavalloni will tour the world with this show, together with the dance company Les Ballets C de la B.

In 2003 she started exploring the 20th century chamber repertoire for voice and piano in duo with Andrea Rebaudengo. This work culminated in a CD (Cristina Zavalloni, 2003 - Sensible Record) and recitals throughout Europe and Central Asia (Uzbekistan).

She collaborates regularly with pianists Andrea Rebaudengo and Stefano De Bonis, and Dutch-American violinist Monica Germino. She has recorded for Winter & Winter, Felmay, Ishtar, Cantaloupe, and recently signed a contract with the EGEA label.

Composer Louis Andriessen turns seventy this year. In a disc celebrating the composer’s septuagenarian status with a quartet of recent works, the Boston Modern Orchestra project, conducted by Gil Rose, suggests that several through-lines between established tendencies and new collaborators have kept the Dutch composer’s work fresh, vibrant, and engaging.

The music of Louis Andriessen (b. 1939) becomes ever more fascinating as he grows older. A contemporary of Glass and Reich, he hit the big time in 1976 with De Staat, a wild, aggressive choral-instrumental minimalist masterpiece. Always an original (“I like the impossible, to put myself in a difficult situation. I see composing as an experiment.”), he produced a few noisy loudnesses along the way. I remember a large-ensemble piece at Tanglewood with, I think, eight double-bass clarinets growling and clattering away.

In his book The Rest is Noise, Alex Ross calls Louis Andriessen “the only major European minimalist.” You wouldn’t know that from the four works on this disc. True, there’s repetition, but not in the Glass/Riley/Reich sense of the word. Scored for percussion and three keyboards, the opening work, Bells for Haarlem, is built from long sustained chords that strike at unpredictable intervals, with a subtle melody taking shape as the piece progresses.

Cristina Zavalloni is a mezzo with backgrounds in both jazz and classical music, whose work is particularly beloved of Louis Andriessen. She is the main protagonist for three of the four works here.

This is an important album – to the uninitiated, it may seem strange, but stay with it, there’s a payoff at the end. Louis Andriessen is no stranger to adventurous listeners: he’s been a fixture of the avant garde for over forty years. This album begins with a carillonesque instrumental and then a series of art songs, all but one based on poems by legendary, mad Italian poet Dino Campana. Campana spent much of his life institutionalized, including his final years: his surreal, twisted, horrific imagery and sense of anguish compare with Baudelaire at his most crazed.