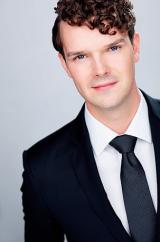 An active crossover artist, “the dashing Giebler, whose voice would make anyone melt” (BroadwayWorld), received much critical acclaim as Marius in a regional production of Les Misérables and was nominated for a 2014 Gregory Award (Outstanding Supporting Actor in a Musical) for his performance. In 2018, Brian was thrilled to revisit the role of Jack in Into the Woods with Charlottesville Opera, where he was lauded for "his spotless tenor vocals (that were) a highlight of the production" (BroadwayWorld). The role also won Brian a regional Best Supporting Actor award at the 2005 Anvil Awards. Brian was also praised for his portrayal of Fabrizio in Adam Guettel's The Light in the Piazza (Best Musical nomination, 2011 Wilde Awards), being hailed as a “powerful tenor for such a young man” (Milan News). He has played such iconic roles as Dickon in The Secret Garden, Cain/Japheth in Children of Eden, and Nicely Nicely Johnson in Guys and Dolls. Brian covered the roles of Tony in West Side Story (Aspen), Anthony in Sweeney Todd (Aspen), and Lt. Cable in South Pacific with the Rochester Philharmonic Orchestra.

​Brian performs with chamber ensembles throughout the country, including GRAMMY® Award-winning Conspirare of Austin, GRAMMY® nominated Seraphic Fire of Miami, GRAMMY® nominated Clarion Music Society in NYC, and he is a member of the GRAMMY® nominated Choir of Trinity Wall Street in Manhattan, where he currently resides. He can be heard frequently with the Handel and Haydn Society in Boston, Ekmeles, TENET, True Concord Artists, Yale Choral Artists, Spire Chamber Ensemble, Musica Sacra, and Sounding Light. While living in Seattle, Brian was a member of the Seattle Opera Chorus where he performed Puccini’s La Bohème and Wagner's Götterdämmerung.

In 2010, Brian was seen on Philadelphia’s Fox 29 News as the 2010 Delco Idol musical theater competition winner at the Media Theatre in Pennsylvania. He was also a featured artist with the Skaneateles Music Festival in “Broadway comes to Brook Farm” under guest musical director Paul Sportelli. In Seattle, he had the pleasure of singing with the Pacific Northwest Ballet Orchestra in their 2012 Holiday production of the Seattle-favorite, The Nutty Nutcracker, inserting classical music and popular Christmas tunes over top of the sweeping Tchaikovsky score.

As a graduate student at the University of Michigan, Brian performed as Ferrando in Cosi fan Tutte and as Bardolfo in Falstaff. He has also sung the roles of Basilio in Mozart’s Le Nozze Di Figaro, Pedrillo in Die Entführung aus dem Serail, and Dr. Blind in Die Fledermaus. Brian made his international debut in Italy with the International Opera Theater of Philadelphia, premiering the operatic adaptation of Shakespeare’s La Tempesta as Ariele.

A little known fact about Brian is his expertise on trumpet. At Eastman, Brian studied in the trumpet department as a primary student and performed with the internationally acclaimed Eastman Wind Ensemble. He also performed with the Eastman Lab Jazz Band, University of Rochester Symphony Orchestra and Wind Ensemble, University of Maryland Concert Band, Philadelphia Youth Orchestra at Verizon Hall, and the University of the Arts Regional Grammy Jazz Band. In the pit, Brian played for Les Miserables (Media Theatre), Cabaret, and Assassins (Eastman).

Brian is a graduate of the University of Michigan, where he earned his masters degree in Vocal Performance. He is also an alumnus of the Royal Academy of Music in London, England, and holds a bachelors degree in Vocal Performance from the Eastman School of Music. He spent two summers (2011, 2012) as a Young Artist with the Aspen Opera Theater Center.