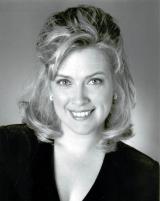 Angela Gooch has spent a great deal of her career as an operatic soprano. From Mozart’s Clemenza di Tito to Verdi’s Ernani, she has performed and covered a variety of roles in operas including Der Freischütz, Fidelio, The Nose, The Bartered Bride, Candide, The Rise and Fall of the City of Mahagonny, Le Grande Duchess of Gérolstein, the world premiere of Zhou Long’s Madame White Snake, and Robert Ward’s Pulitzer Prize-winning opera The Crucible. Other credits also include Gianni Schicchi, Don Pasquale, Der Rosenkavlier, Die Fledermaus, and The Telephone. Ms. Gooch performed as the Voice of the Fountain in Golijov’s Grammy Award-winning Ainadamar under the direction of Peter Sellars. She also created the role of Mary Lincoln in the world premiere of Eric Sawyer’s Our American Cousin with the Boston Modern Orchestra Project and can be heard on the BMOP/sound label.

Ms. Gooch has performed with various symphonies and festivals including the Tanglewood Festival, the Monadnock Festival, Alabama Symphony Orchestra, Red Mountain Chamber Orchestra, and with the Florestan Recital Project. She has also appeared as a featured performer at international venues including Lincoln Center’s Alice Tully Hall, the United States Presidential Yacht, the U.S.S. Sequoia, and in Italy at the Casa Verdi.

Ms. Gooch has served on the faculties at Boston University, Boston Conservatory, the Longy School of Music of Bard College, and the Walnut Hill School for the Arts, for which she served ten years as the head of the voice program. She has also served on the faculty at Boston University Tanglewood Young Artist Vocal Program and has committed many years of her work to teaching young students the exciting, dramatic world of opera. She has been honored by the NFAA and named in the Who’s Who Among American Teachers as one the art’s most distinguished teachers.

Ms. Gooch is also an accomplished pianist. She has served as music director/conductor for Birmingham Summerfest, Birmingham Children’s Theatre, the Walnut Hill School and the Opera Theatre of Weston, where she recently music directed the east coast premiere of Nolan Gasser's opera The Secret Garden.