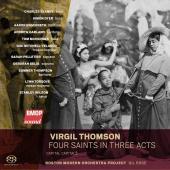 Profundity is absurd and absurdity profound in this great 20th-century modernist collaboration.

[CD Review] Harkening Back To 'Four Saints' During The Harlem Renaissance

The next time you see a magpie in the sky, I hope you'll remember Four Saints in Three Acts.

That there are a prologue and four acts, and 18 saints — maybe 19, depending on how you count — needn't detain us.

What we have here is a collaboration between an aesthete Southern Baptist out of Kansas City and an American writer living in Paris whose works people talked about and no one understood.

In 2016, the Boston Modern Orchestra Project, conducted by Gil Rose, performed Four Saints in Three Acts, producing a terrific recording. The text and music are addictive, as I'm sure Thomson intended them to be. (Find the recording on Amazon and ArkivMusic.)