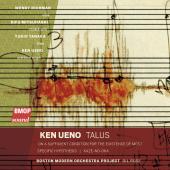 I listen to a lot of contemporary music and like to think I have it all figured out. And along comes Talus which greets us with a blood-curdling scream more appropriate to Hitchcock’s Psycho. Then follow Ueno’s overtone vocalizations akin to Tuvan throat singing. I admit it, I smiled. Three trips through this disc have dulled the surprises. Beyond the shock value and clever rhetorical gestures, the mild results don’t equal the multifaceted intents.

In the early 1990s, when so-called CNN operas based on actual historical events became all the rage, you’d occasionally come upon a new classical CD stickered with a warning label due to bad language and racy situations.

The first time I saw Ken Ueno was at the 2004 performance of Philip Glass’s Music in 12 Parts at Alice Tully Hall; he seemed excited and intense, and also strangely disarming. His music is like that, too. We’ve corresponded a few times and I’m always interested in what he’s doing.

Big ups to my composer compadre Ken Ueno. He’s had a heck of a busy year. In addition to an active teaching schedule at University of California-Berkeley, where he’s an Assistant Professor of Composition, he’s been busily composing, performing, and supervising recordings of his music.

BMOP/sound, the nation's foremost label launched by an orchestra and devoted exclusively to new music recordings, today announced the release of Ken Ueno: Talus, an imaginative collection of three innovative concerti by composer/vocalist Ken Ueno (winner of the 2006-07 Rome Prize and the 2010-11 Berlin Prize and UC Berkeley professor). Representing Ueno's debut album on BMOP/sound, Talus constitutes a kind of trilogy that contemplates mortality as well as the multifaceted ways in which survivorship requires heroism.