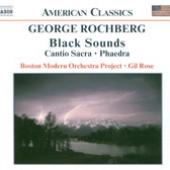 Black Sounds, written for a ballet depicting the act of murder, is an unrelentingly intense work that packs a good deal of violence into its 17 minutes. George Rochberg thought of the piece as an “homage” to Varèse, and indeed with its stark, near-atonal language, repetitive phrases, and broad, colorful percussion array, it sounds a good deal like the French/American composer’s music, including its scoring for wind ensemble.