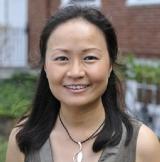 Using a decidedly contemporary language of diverse harmonic color, inventive timbre and ingenious effects, award-winning composer Yu-Hui Chang has written a wide range of music that compels and resonates with professional musicians and audiences alike. She is the recipient of fellowships from the Guggenheim Foundation, the American Academy of Arts and Letters, Radcliffe Institute at Harvard University, and commissions from the Fromm Music Foundation, Koussevitzky Music Foundation, Barlow Endowment for Music Composition, and Meet The Composer. Additional honors include the Aaron Copland Award, Yoshiro Irino Memorial Prize from the Asian Composers' League, and the Council for Cultural Affairs of the Executive Yuan (Taiwanese government agency).

A native of Taiwan, Yu-Hui began her intensive music training in piano, voice, and music theory at the age of six, and started seriously pursuing composition as a career at the age of fourteen. After graduating from the National Taiwan Normal University, she came to the United States in 1994 and received her graduate degrees from Brandeis University (Ph.D.) and Boston University (MM). Now an Associate Professor at Brandeis University, Yu-Hui taught at the University of California-Davis between 1999-2006. As a dedicated promoter of contemporary music, she co-directed the Empyrean Ensemble for six years, curated more than fifty concerts, and often performed as a conductor or a pianist. She is currently a Co-Artistic Director of the Boston-based Dinosaur Annex Music Ensemble, a leading exponent of contemporary music performance since 1975.

In the summer of 2011, Yu-Hui was a guest composer at the Wellesley Composers Conference. She has also been featured as a guest composer in the Asian Music Festival in Tokyo, the Asian Contemporary Music Festival in Seoul, the Pacific Rim Music Festival at UC Santa Cruz, and the Festival of New American Music at California State University – Sacramento. In March 2006, Works and Process at the New York Guggenheim Museum presented three of her works, highlighting Yu-Hui as a new talent of the younger generation.

The most essential aspect of Yu-Hui's music communicates an aesthetic and philosophical view of humanity that is timeless and reaches beyond cultural boundaries. In its technical aspect, her music continuously explores new possibilities of timbre, texture, and manner of narration. She believes that a well-composed piece of music may speak to its audience effectively regardless of its style. Her contemporary take on cross-cultural genres and topics has led her to an array of projects, including Wu (2006-07) and Toil, Live, and Sing (2009). Each piece incorporates a Korean traditional instrument (gayaguem and ajaeng respectively) with Western strings. Her piano solo work Longbird (2006), commissioned by Chamber Music Now for pianist Marilyn Nonken, was a reinterpretation of a Taiwanese political folksong of the Japanese Colonial Period. Yu-Hui also wrote the score for the Brandeis Theater Company on a play based on a Chinese folktale – The Orphan of Zhao (2007), which was scored for erhu, yangqin, viola, cello, and percussion. Dou-Zhen (2008), a work commissioned by the preeminent Taiwanese ensemble Ju Percussion Group, was staged for two competing groups of percussionists playing Chinese drums and Western tom-toms. One of her recent works, Pu Songling's Bizarre Tales (2011), also combines both Chinese and Western instruments. It was performed by Music from China in Meet the Composer's Three-City Dash Festival in New York.

Yu-Hui's compositions may be found in CDs recorded by the Left Coast Chamber Ensemble (Shadow Chase – for string quartet), pianist Lara Downes (Ballade, "Reform: album, Azica Records), and pianist Amy Briggs (Tangled in Smoke, "Tangos for Piano" album, Ravello Records). Being, a set of two songs with lyrics by Billy Collins, has been recorded by Volti, and will soon be released under the Innova label. Yu-Hui also appears as a conductor in composer Ross Bauer's CD "Ritual Fragments" and as a pianist in a CD titled "Tribute to Chou Wen-chung", both released by the Albany label.