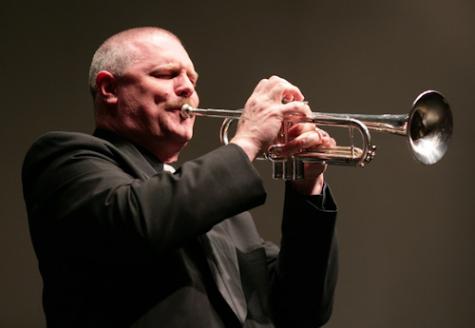 Hailed by the Boston Globe for his “dazzling, clarion brightness with elegant edges” and in the Boston Musical Intelligencer for “virtuosity and musicality that was simply stunning,” trumpeter Terry Everson is an internationally renowned soloist, educator, composer/arranger, conductor, and church musician. He first gained international attention in 1988, winning (on consecutive days) both the Baroque/Classical and 20th Century categories of the inaugural Ellsworth Smith International Trumpet Competition, with further success as First Prize laureate of the 1990 Louise D. McMahon International Music Competition. Mr. Everson has premiered major works by composers Richard Cornell, John Davison, Stanley Friedman, Jan Krzywicki, Elena Roussanova-Lucas, and Gary Ziek. His has released three complete recordings of numerous notable modern works for trumpet and piano, as well as single entries on discs devoted to the works of Davison, Krzywicki and Lisa Bielawa; he has also recorded as soloist with the New England Brass Band, the Lexington Brass Band and the Eastern Wind Symphony, and is featured in many CD releases as Principal Trumpet of the Boston Modern Orchestra Project. Coming months will see CD releases of live performances with the Boston University Wind Ensemble, as well as the first installment of an “Art of the Sonata” series with pianist Shiela Kibbe.

Mr. Everson has served on the faculty of the Boston University College of Fine Arts and Tanglewood Institute since 1999; his work at BU was recognized with the University’s 2014 Metcalf Award for Excellence in Teaching. He has given masterclasses and recitals throughout the United States, as well as in Costa Rica and China, where he was visiting faculty for three weeks at the conservatories in Xi’an and Shenyang while on sabbatical from BU in spring 2013. He is currently Principal Trumpet of the Boston Modern Orchestra Project, Odyssey Opera, and the Peninsula Music Festival. He appears frequently as a recitalist and clinician, and as soloist with orchestras, wind ensembles, and brass bands. His extensive concert experience also includes appearances in the Boston Symphony and Pops, Philadelphia Orchestra, the Brass Band of Battle Creek, Boston Ballet, and the Chestnut Brass Company, and as conductor of the Costa Rica National Symphony Brass & Percussion and the Boston University & University of Kentucky Trumpet Ensembles in various venues, including three international brass conferences.

An active church musician for over three decades, Mr. Everson has been Minister of Music for congregations in Pennsylvania and Kentucky, as well as his current home at Metro Church in Marlborough, MA. Much of his compositional output derives its basis from hymnody and related materials, such as his trumpet ensembles Ponder Anew and There’s a Great Day Coming, the Christmas carol setting Once in Royal David’s City for bass trombonist Douglas Yeo and the New England Brass Band, and his Hyfrydol Aspects for trumpet and piano written for his son Peter. Mr. Everson has also written competition pieces for the Boston University Trumpet Ensemble, whose performances of Idea Number Twenty-Four and There and Back Again have won prizes in the National Trumpet Competition in Washington, DC; Idea Number Twenty-Four has since become a staple of contest repertoire featured at the (USA) National Trumpet Competition. The BU Trumpet Ensemble's performance of his arrangement of the Finale of Felix Mendelssohn's Fourth Symphony at the 2007 ITG Conference received an enthusiastic standing ovation. Mr. Everson has filled commissions from Wizards! double reed ensemble, the Texas Tech Trombone Choir, the Lutheran Music Program (brass quintet) and the Philadelphia College of Bible (trumpet ensemble). His setting of W.L. Thompson's There's a Great Day Coming has been recorded by Philip Smith (Principal Trumpet, New York Philharmonic) on the Cala label's New York Legends series.

While earning Bachelor and Master of Music degrees in Trumpet Performance from the Ohio State University, Mr. Everson studied with Richard Burkart; lessons with Frank Kaderabek followed over the next few years. Mr. Everson is a member of the Pi Kappa Lambda music honor society. He is on the Executive Board of the National Trumpet Competition, the Board of Directors of Metro Church, is an Honorary Member of the New England Brass Band, and is a Life Member of the International Trumpet Guild, having served as Host for the Guild's 1998 Conference in Lexington, Kentucky. He has published articles in the ITG Journal on preparation for solo competitions and memorization, and for six years was the journal's Music Notation Specialist. In 2008, Mr. Everson hosted the Ellsworth Smith Competition at Boston University.

Terry Everson is an Artist/Clinician for S.E. Shires Trumpets of Hopedale, MA.