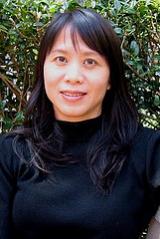 As the recipient of a Koussevitzky Music Foundation Commission (2004), a Barlow Endowment Commission (2001), a Guggenheim Fellowship (2000), and an American Academy in Rome Prize (1999), the music of Shih-Hui Chen has received significant recognition in recent years. A performance of Twice Removed at Lincoln Center was described by the New York Times as "...ruminative and involving, drawing the listener in through a process of gradual thematic metamorphosis." String Quartet No. 3, premiered by the Arditti Quartet at the Tanglewood Music Festival, was praised by The Boston Globe as having "... a sureness of step and gentleness of spirit that are very winning." In 66 Times, the Cleveland Plain Dealer finds a sensitive text setting which "... abounds in arching vocal lines, harmony that sits on the precipice of tonality, and richly hued atmospheres that depict the various seasons." This work has also been analyzed by German ethnomusicologist Barbara Mittler for the Asian Music Journal CHIME, who also has written an entry about Ms. Chen in the New Grove Dictionary of Music and Musicians.

Born in Taipei, Taiwan, Shih-Hui Chen came to the United States in 1982 and received her master's degree from Northern Illinois University and her doctoral degree from Boston University. There have been many performances of her works, including those by the Cleveland Chamber Symphony, Philadelphia Symphony Orchestra, and Cleveland Symphony Orchestra. Also frequently appearing in programs abroad, her music has been featured in China, Taiwan, Korea, Japan, Germany, Italy and Amsterdam. As a recipient of fellowships, Ms. Chen has been awarded grants from the Fromm Foundation, the National Endowment for the Arts, Meet the Composer Foundation, the Tanglewood Music Center, the Mary Ingraham Bunting Institute of Harvard University, and the Bellagio Rockefeller Foundation.

Shih-Hui Chen also enjoys collaborating with artists from other disciplines. She has completed a film score for the documentary, Once Removed, by film maker Julie Mallozzi (premiered at the Museum of Fine Arts in Boston), and written There, a song cycle composed with poet Robert Creely, using paintings by Francesco Clemente. To educate children about new music, she wrote Little Dragonflies, a set of children's piano pieces based on Taiwanese folk melodies. She is currently composing a short musical drama "Lullaby" based on Taiwanese texts to be presented to more than four thousand school children in the Houston area.

Recent performances include Fu II by members of Seattle Symphony Orchestra; Moments for Orchestra (Shanghai, China); Jin, Concerto for Pipa and Chamber Orchestra with Wu Man and the Boston Modern Orchestra Project; Shui by the Fischer Duo (Boston and NY); Four Little Pieces for Wood (Dallas and Houston), and half of a Composer's Portrait Concert by the Freon Ensemble in Rome, Italy. In the Spring of 2005, four premieres of her works were presented: String Quartet #5 for the Chiara String Quartet, Plum Blossoms for saxophone and piano duo (commissioned by the World-Wide Concurrent Premieres & Commissioning Fund, Inc), Sweet Rice Pie, Four Taiwanese Nursery Rhymes for the Empyrean Ensemble in California, and a new solo piano piece for Hsia-Jung Chang who will perform a solo recital at St. Martin in the Fields in London.

Shih-Hui Chen is currently an Assistant Professor of Music Composition at the Shepherd School of Music, Rice University and Composer in Residence at Boston University's Tanglewood Institute (2000, 2001, 2004). She is also a music advisor for Formosa Chamber Music Society, an active member of Musiqa (a composers' collective based in Houston), and the Asian Composers' League.