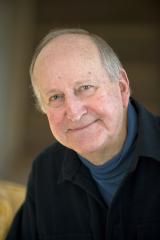 Ronald Perera was born in Boston on Christmas Day, 1941. He received his undergraduate and graduate degrees in music from Harvard, where his principal composition teacher was Leon Kirchner. He also worked independently with Randall Thompson. Subsequently he spent a year on a John Knowles Paine Traveling Fellowship studying electronic music at the University of Utrecht. His more than seventy compositions include three operas, song cycles, chamber, choral and orchestral works and—in the early part of his career—several works which combine voices or instruments with electronically generated sounds.

He is especially known for his many text settings. Reviewing the recording of his cantata, The Outermost House, John Story of Fanfare magazine wrote: “Ronald Perera is among the finest living combiners of words and music.”

Mr. Perera has been the recipient of awards or fellowships from, among others, the National Endowment for the Arts, ASCAP, the National Association of Teachers of Singing, the Massachusetts Arts and Humanities Foundation, and Harvard University. His music has been performed by many conductors, soloists, and ensembles both in this country and abroad. His music is published by E.C. Schirmer, Boosey and Hawkes, Music Associates of New York, and Pear Tree Press Music Publishers, and is recorded on the Albany, CRI, Navona and Opus One labels.

Mr. Perera retired in 2002 from a thirty-year teaching career at Smith College, where he was the Elsie Irwin Sweeney Professor of Music. He lives in Leeds, Massachusetts and Yarmouth Port, Massachusetts.

For more information please visit his website at www.ronaldperera.com.

[Concert Review] More from the Voice of America

What I’ve heard at BMOP has always been highly accomplished.