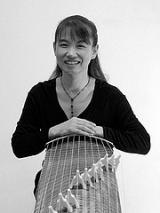 Masayo Ishigure began playing the koto and jiuta shamisen at the age of five in Gifu, Japan. After initial studies with Tadao and Kazue Sawai, she became a special research student in 1986 at the Sawai Koto Academy of Music. The aim of the academy was to shed new light on koto music by incorporating everything from Bach to jazz and thus change the koto from being thought of only as a traditional Japanese instrument into an instrument of universal expressiveness. Later Masayo Ishigure became one of a small group of virtuoso disciples of the Sawais and successfully completed the 33rd Ikusei-kai program sponsored by NHK to foster and train aspiring artists in Japanese music.

In 1988, Ms.Ishigure received a degree in Japanese Traditional Music at Takasaki Junior Arts College with a concentration on koto and shamisen. The same year she was recorded on the CD entitled The World of Tadao Sawai.She played koto and shamisen on the educational video. In 1994 she appeared on the CD entitled Tori no Yoni: (Flying Like a Bird) Tadao Sawai compositions.

She released her own solo CD Grace in 2001. In 2003 she recorded East Wind Ensemble which featured Hayao Miyazaki's animation songs arranged for koto and shakuhachi music. Since arriving in New York City in 1992 Ms.Ishigure has performed at Lincoln Center, Carnegie Hall-Weill Recital Hall, BAM, Merkin Hall, Trinity Church, Symphony Space and other venues in the NY city metropolitan area. She has performed at Harvard, Yale, Princeton, Columbia, and many other prestigious universities and colleges. She made several duo appearances with NY City Ballet Principal Dancer Mr. Peter Boal, and was guest artist with the San Diego and New Haven Symphony Orchestras. Ms Ishigure has appeared in concerts for World Music Institute, Japan Society, Music from Japan, China Institute, and many others. She has participated in music festivals in Japan, Thailand, Brazil, Holland, France, Germany and has performed in Mexico, Russia, Belarus, Jamaica, Hawaii, Alaska, and many venues throughout the US.

In 2001 and 2005, Ms.Ishigure and several of her students performed with koto master Kazue Sawai at the Freer Gallery of the Smithsonian Institute in Washington DC. In 2005 she and her students also appeared with Kazue Sawai at Towson University in Maryland and the Asia Society in NYC. She has been featured in two public television broadcasts, Music Under New York,and World of Music. In 1997, she recorded koto music for CBS Master Work for use during the 1998 Nagano Winter Olympics. She has recorded koto music for use in several television commercials.

As an artist in residence from 1992 to 2006, Ms.Ishigure taught koto and shamisen in the music department of Wesleyan University (CT) where she formed the Wesleyan Koto Ensemble. She also offers private lessons as the only Sawai Koto Academy Instructor in the New York City and Washington DC area. She recorded music for the soundtrack of the movie Memoirs of a Geisha by John Williams in 2005 along with Yitzhak Perlman, Yo Yo Ma, and others.