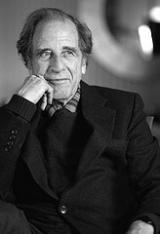 Ever since his early days as a musical "wunderkind," Lukas Foss has shown himself to be one of that rare breed -- an all-around musician, enjoying equally stellar reputations as a composer, conductor, pianist, educator, and spokesman for his art. The prestigious honors and awards he has received emphasize his importance as one of the most brilliant and respected personalities in American music.

As a composer, Mr. Foss has, like his idol J.S. Bach, eagerly embraced the musical languages of his time, producing a body of well over one hundred works that Aaron Copland called, in 1974, "among the most original and stimulating compositions in American music." Tom Johnson in the Village Voice went further: "Little by little he is knitting together a body of work which may actually speak for contemporary culture as a whole more eloquently than any other."

As Music Director of the Brooklyn Philharmonic, the Buffalo Philharmonic and the Milwaukee Symphony, Foss has been an effective champion of living composers and has brought new life to the standard repertoire. The adventurous mix of traditional and contemporary music that he programs and conducts with the Brooklyn Philharmonic at the Brooklyn Academy of Music was described in 1986 by the New York Times as "The most engrossing and unusual programs in town ... Our musical life would be richer if Lukas Foss ... could hire himself out as a sort of 'programmer at large.' He seems incapable of a mechanical idea."

In 1937, as a fifteen-year-old prodigy, Lukas Foss came to America to study at Philadelphia's Curtis Institute of Music. By that time, he had already been composing for eight years, starting with his first piano teacher, Julius Herford, in Berlin. He had also studied in Paris with Lazare Levy, Noel Gallon, Felix Wolfes, and Louis Moyse, after his family fled Nazi Germany in 1933. At Curtis, his teachers included Fritz Reiner (conducting) and Isabelle Vengerova (piano). At age 15, G.Schirmer published his first work, a series of piano pieces written mostly on the New York subway. By age 18, the young musician had graduated with honors from Curtis, and was headed for advanced study, in conducting, with Serge Koussevitzky at Tanglewood and in composition with Paul Hindemith at Yale University.

When Mr. Foss was named to succeed Arnold Schoenberg as professor of composition at the University of California at Los Angeles in 1953, the University probably thought it was replacing a man who made traditions with one who conserved them. But that is not how things turned out. Indeed, Mr. Foss followed his curiosity into the very den of the avant-garde. In 1957, in search of the spontaneous expression that lies at the root of all music, he founded the Improvisation Chamber Ensemble, a foursome that improvised music in concert, working not from a score but from Foss' ideas and visions. The effects of these experiments soon showed in his composed works, where Mr. Foss began probing and questioning the ideas of tonality, notation, and fixed form. Even time itself came up for scrutiny in the 1960 work Time Cycle for soprano and orchestra, a setting of texts about time by Auden, Housemam, Kafka and Nietzsche, that was first performed by Leonard Bernstein and the New York Philharmonic, with interludes by Foss's Improvisation Chamber Ensemble. At the premiere, Mr. Bernstein, in an unprecedented gesture of respect, performed the entire work twice that same evening. Time Cycle received the New York Music Critics' Circle Award for 1961, and was recorded on the CBS label.

Mr. Foss' compositions of the last twenty-five years prove that a love for the past can be reconciled with all sorts of innovations. Whether the musical language is serial, aleatoric, neoclassic or minimalist, the "real" Lukas Foss is always present. The essential feature in his music is the tension, so typical of the 20th century, between tradition and new modes of music expression. This tension is most explicit in such works as Baroque Variations for orchestra (1967), which "deconstructs" pieces by Handel, Scarlatti, and Bach. It has received frequent international performances and has had a strong influence on younger composers. On the other hand, traditionalism is not absent in such experimental works as Echoi (1961-63), which, along with Mr. Foss's Paradigm and Solo Observed, is considered one of the major contemporary works for chamber ensemble.

His ideas, and his compelling way of expressing them, have earned Lukas Foss continued respect as an educator as well. He has taught composition at Tanglewood, and has been composer-in-residence at Harvard, the Manhattan School of Music, Carnegie Mellon University, Yale University, and presently, Boston University. In 1983, he was elected to the American Academy and Institute of Arts and Letters, of which he is now a Vice Chancellor. The holder of eight honorary doctorates, he is in constant demand as a lecturer. In 1986, at the National Gallery in Washington D.C., he delivered the prestigious Mellon Lectures.

Lukas Foss lives in New York City with his wife Cornelia, a noted painter. They have a son and a daughter.

While the recent passing of Lukas Foss (1922-2009) strikes a sad note for many of us, the release of this superb recording of The Prairie serves to both celebrate and elucidate his unique genius and extraordinary life. Born Lukas Fuchs in Berlin, Germany, Foss received his early training as a pianist and composer with Julius Goldstein (who, upon emigrating to the United States, changed his last name to Herford and ultimately became one of the most significant teachers of conducting and score study in American history).

Lukas Foss died aged 86 on 1 February 2009. His legacy as a composer is considerable and varied, and there were few areas of American musical life from the 1950s to the 1980s that did not feel his influence in some way. His important musical directorships, firstly at Buffalo and then at Brooklyn, Jerusalem, and Milwaukee, brought his controversial musical ideology into conflict with some of his audiences, performers and managers.

Lukas Foss died on February 1 of this year at the age of 86. Composer, conductor, orchestra builder, virtuoso pianist, and respected teacher, Foss wore many hats after he made his first big splash with this audacious song of praise to the American spirit. He had been composing since age seven, but it was Robert Shaw’s 1944 premiere of this work that brought him to the attention of the musical world. The Prairie was enthusiastically programmed by orchestras and choral societies throughout the country, and won the 1945 New York Music Critics’ Circle Award.

The booklet informs us, ‘Lukas Foss, b. 1922’, but sadly, Foss passed away on February 1st of this year. So, a release which surely would have brought renewed attention to a worthwhile American composer now also must serve as a memorial.

I find it astonishing that this delicious oratorio hasn’t been performed or recorded much. It’s every bit a crowd-pleasure and very much in the tradition of middle-American composers of the 20s, 30s, and 40s, such as Roy Harris, Howard Hanson, and Aaron Copland. Lukas Foss was born in Berlin in 1923, then moved to Philadelphia as omens of war threatened Europe. He moved to American and studied with Sergei Koussevitzky for several years before attending Yale, where he studied with Paul Hindemith.

Lukas Foss composed Griffelkin for the NBC television network, which broadcast the opera on November 6, 1955. Although Griffelkin is based on a children’s fable, Foss wanted it to appeal to listeners ages “8 to 80,” so he wrote in a very accessible though not simplistic musical style—and the story has enough of a mature subtext to interest adults as well as children (as all good “children’s” music must).

The release of this superb recording of The Prairie serves to both celebrate and elucidate Foss' unique genius and extraordinary life.