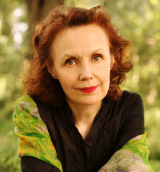 Kaija Saariaho was born in Finland and lived a childhood embedded in music, playing several instruments. In parallel to musical studies, she started art studies, at the Fine Arts School of Helsinki, that she quickly quit to concentrate on music. At the Sibelius Academy in Helsinki, she received the composition teachings of Paavo Heininen, before to follow, in Darmstadt then in Fribourg, the courses of Brian Ferneyhough and Klaus Huber.

Characterizing her works of the eighties, her sensual writing, descriptive and lyrical, unfold subtile transformations. Her research of new timbres has stimumlated her study of new technics in the instrumantal as well as the computer domain, for which starting in 1982, she initiated herself at Ircam. This practice constitutes an important element of her compositions.

She confirms her international notoriety with works such as Verblendungen for orchestra and tape(1982-84), Lichtbogen for chamber ensemble and live-electronics (1985-86), Nymphéa (1987) commission of the Lincoln Center for the Kronos Quartet.

Starting in the nineties, her music becomes more expressive, often faster in its melodic fluctuations.

What stays central: timbre and colors. Her principle works include a violin concerto, Graal théâtre, written for Gidon Kremer in 1995 ; two works dedicated to Dawn Upshaw : Château de l’âme premiered at the Salzbourg Festival in 1996, and Lonh, a cycle of melodies for soprano and electronics premiered at the Wien Modern Festival in 1996 ; Oltra mar for orchestra and mixed choir, premiered in 1999 by the New York Philharmonic Orchestra ; a flute concerto, Aile du songe, composed for Camilla Hoitenga (2001) ; Nymphea Reflexion for string orchestra, dedicated to Christoph Eschenbach (2001) ; Orion for the Cleveland Orchestra (2002) ; Quatre Instants, for soprano, piano/orchestra, for Karita Mattila, premiered in April 2003.

Kaija Saariaho participates to numerous multimedia productions such as the ballet Maa (1992) choreographed by Carolyn Carlson, or Prisma, a cd-rom dedicated to her work (Prix multimédia Charles Cros in 2000).

Her first opera, L’Amour de loin, libretto by Amin Maalouf and staging by Peter Sellars, raised an fantastic success for its premiere at the Salzbourg Festival in 2000, and won the Grawemeyer Composition Award in 2003. Among the many awards and prizes she received: Prix Italia, the Musical Award of the North Council, or the Musical America Composer of the year 2008.

Her second opera, Adriana Mater, on a original libretto by Amin Maalouf, merging the dark realities of the present and dream, followed, also staged by Peter Sellars, at Opéra Bastille in march 2006. It is performed again in Helsinki in Santa Fe in 2008.

Kaija Saariaho has also signed a vast oratorio, La Passion de Simone, commission of the Wien Festival, the Los Angeles Philharmonic, the Barbican and Lincoln Centers. The text of this work has been written by Amin Maalouf around the life and works of the philosopher Simone Weil. It was premiered in November 2006 in Wien, then London, Helsinki, Stockholm, and will be for the summer 2008 in New York at the Lincoln Center for the Performing Arts

In February 2007 Notes on Light for cello and orchestra was premiered in Boston, commissioned at the occasion of the 125th anniversary of the Boston Symphonic Orchestra. This work was already performed more than ten times around the world by Anssi Karttunen.

The world premiere of Mirage for soprano, cello and orchestra, written for Karita Mattila and Anssi Karttunen, took place at Salle Pleyel with the Orchestre de Paris conducted by Christoph Eschenbach in March 2008. The piece was then performed in London, Berlin and Carnegie Hall in New York.

Laterna Magica, an orchestral work for the Berliner Philharmoniker conducted by Simon Rattle, has been premiered September 2009 in Berlin and Lucern.

Her third opera, Emilie, has been premiered by Karita Mattila in March 2010 at the Opéra de Lyon, then immediately after at the Amsterdam Opera, with Mattila and then with Karen Vourc’h.

Of the four works I heard, it was Lucier's extremely lean piece for clarinet and slow-sweep pure-wave oscillator that hit home technologically and spatially in Paine Hall.