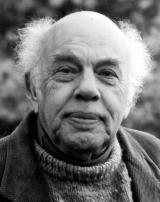 Harold Shapero is a Boston composer through-and-through; born in Lynn and raised in Newton, he studied with Nicolas Slonimsky, Ernst Krenek, Piston, and Boulanger and graduated from Harvard in 1941. He won the Prix de Rome that year (though the war kept him from traveling to Italy). He worked with Hindemith and Copland at the Berkshire Music Center and became acquainted with Stravinsky. Shapero became one of a loosely associated "Boston School" of composers, also including Irving Fine and Arthur Berger, whose awareness of the twelve-tone method and penchant for neoclassicism and counterpoint—via, in Shapero's case especially, Viennese Classicism itself—resulted in works of satisfyingly clear musical architecture and transparent harmonic and melodic surfaces. Acclaimed in print by Aaron Copland, Shapero was one of the brightest lights of American music at that time, along with Lukas Foss. After he began teaching at the recently opened Brandeis University in Waltham, Massachusetts, Shapero's output slowed significantly for several decades, but he was an influential teacher until his retirement to concentrate on composition almost four decades later. He also founded the school's electronic music studio and has written many works for acoustic instrument with synthesizer.

Shapero's first attention-garnering work was his Nine-Minute Overture, written while he was still a student in 1940 and premiered the following year in New York City. The Boston Symphony Orchestra premiered his Symphony for Classical Orchestra in 1948 under his friend and contemporary Leonard Bernstein. His Sinfonia in C Minor dates from the same period. It was commissioned by the Houston Philharmonic Orchestra and was premiered in its original version, titled Overture, The Travelers, by that ensemble in 1949, under Efrem Kurtz.