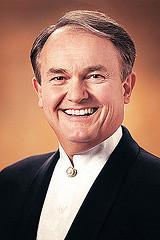 Douglas Ahlstedt has sung professionally in the world's greatest opera houses and concert halls from the renowned stages of Europe, South America, the Orient, and Africa, to the Metropolitan Opera, where he has sung 189 performances. He is the only American tenor featured in leading roles, including Fenton in Verdi's Falstaff and Pelleas in Debussy's Pelleas et Melisande, on the James Levine 25th Anniversary Collection of notable scenes from Metropolitan Opera broadcasts.

His singing career began with the American Boychoir with whom he toured the United States and Canada. During that period, he sang the role of Miles in the American premiere of Benjamin Britten's The Turn of the Screw.

In addition to performing worldwide, Mr. Ahlstedt is associate professor of voice at Carnegie Mellon University in Pittsburgh, Pennsylvania. He specializes in teaching vocal health and collaborates with the University of Pittsburgh Voice Center to promote proper care of the voice. He is also well known as a national presenter of arts in education.

Mr. Ahlstedt earned a Bachelor of Science degree in music education from the State University of New York at Fredonia, and completed his Master of Music degree at the Eastman School of Music in Rochester, New York.