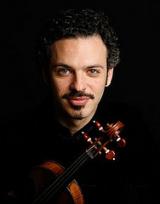 Violinist Colin Jacobsen, a 2003 Avery Fisher Career Grant recipient, first played to critical acclaim at the age of fourteen, collaborating with Kurt Masur and the New York Philharmonic in a performance that was hailed by The New York Times: "Jacobsen was the impressively accomplished soloist in Bruch's Scottish Fantasy, sounding as if he were born to the instrument and its sweet, lyrical possibilities." In May of 2006, he returned to the New York Philharmonic in a performance of Brahms' Double Concerto with cellist Yo-Yo Ma, David Zinman conducting.

Colin Jacobsen began his violin studies at the age of four with Doris Rothenberg and continued with Louise Behrend at the School for Strings and, later, at The Juilliard School Pre-College Division, where he won the school-wide concerto competition. He was also the recipient of the Grand Prize from both the New York State and National American String Teachers Association Competitions. Mr. Jacobsen studied with Josef Gingold for two summers, and graduated in 1999 from The Juilliard School, where he worked with Robert Mann. During the 2000-2001 season, he continued his studies with Vera Beths at the Royal Conservatory of the Hague.

Over the past few years, Colin Jacobsen has entered into a wide range of musical activities. In addition to his appearances with the New York Philharmonic, Mr. Jacobsen has been guest soloist with the symphony orchestras of Albany, Charlotte, Chicago, Eugene, Rhode Island, Nashville, Charleston, the Metamorphosen Chamber Orchestra, Santa Fe Pro Musica and the Boston Philharmonic Orchestra. At the School for Strings 25th anniversary celebration at Carnegie Hall, Mr. Jacobsen gave the world premiere of Ellen Taafe Zwillich's Partita for Violin and String Orchestra. In an unusual concerto collaboration, he recently premiered a concerto by Kevin Beavers based on Pulitzer- Prize-winning author William Kennedy’s novel, Roscoe with the author narrating. Along with his brother, the cellist Eric Jacobsen, he founded the Knights, a flexible chamber orchestra that has played at such diverse events and venues as the Beethoven Festival at the Planting Fields Arboretum, the MATA contemporary music festival, Tonic, and Bargemusic.

As a touring member of Yo-Yo Ma's Silk Road Project, Mr. Jacobsen has collaborated with musicians from Asia and the Middle East including the kemanche virtuoso Kayhan Kalhor and the great Azerbaijani singer, Alim Qasimov. The group has recorded for the Sony Classical label and appeared on the Late Show with David Letterman. Mr. Jacobsen recently arranged an ancient Persian song for the Ensemble, entitled Ascending Bird and is working on other compositions for the group. He has toured China with Tan Dun performing with the composer his Water Passion based on St. Matthew. Mr. Jacobsen has also enjoyed cross-disciplinary explorations with several dance companies, including the New York City Ballet, Mark Morris Dance Group, and the Bill T. Jones/Arnie Zane Dance Company. In May of 2005, he wrote and performed the music for Spiral Songs; a collaboration with C. Eule Dance.

Mr. Jacobsen performs regularly with the Chamber Music Society of Lincoln Center, at Bargemusic, and is a member of the Metropolitan Museum Artists in Concert. He has performed in chamber music settings with musicians such as Joshua Bell, Mark O’Connor, Phillip Glass, Steven Isserlis and Jan Vogler. As the Young Artist in Residence for NPR's Performance Today, he curated a weeks’ programming and performed live for listeners across the country. Mr. Jacobsen has also been a resident performer on WQXR Radio's weekly On A-I-R (Artists-in-Radio) Series.

Prix de Rome recipient Lisa Bielawa (b. 1968, daughter of composer Herbert) has recently been composer in residence with Gil Rose’s Boston Modern Orchestra Project (2006-09). Ms. Bielawa (brought up in San Francisco but now living in Manhattan) is a Yale graduate, but her degrees are in literature and critical studies; she is also a performing soprano, making for an interesting and quite striking list of accomplishments. This collection documents the product of the three Boston seasons and includes some earlier music.

In the Times, Allan Kozinn provided a typically sagacious and deftly written account of the first major concert of the MATA—Young Composers Now! series at the Brooklyn Lyceum (on April 1). The concert closed with the New York premiere of Lisa Bielawa’s Double Violin Concerto, which was played with saintly elegance by Carla Kihlstedt and Colin Jacobsen, backed by Gil Rose and the excellent Boston Modern Orchestra Project.

The Boston Globe Full review
[Interview] A handful of world

That’s the title of Lisa Bielawa’s impressive debut CD. Long known as a singer in Philip Glass’s ensemble, she is now making her mark as a composer, one expansive collaboration at a time.

BMOP is proud to announce that New York-based composer Lisa Bielawa will be in residence for three yeas beginning in October 2006. BMOP was one of six orchestras nation-wide selected for an extended Music Alive residency, a program of Meet the Composer and the American Symphony Orchestra League.

These clever little studies would make attractive encore pieces. Some are particularly memorable...though all show great skill and abundant personality.