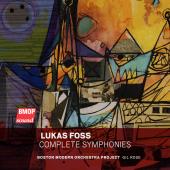 A seminal contribution to the discography of 20th-century American classics: a two-disc compilation of the complete symphonies of Lukas Foss

Lukas Foss’s four symphonies span most of the 20th Century. Foss made a reputation as a dabbler by midcentury, but in reality was essentially a neo-classicist of great gifts who was sidetracked by opportunistic avant-gardeism after he became Schoenberg’s replacement at UCLA. The symphonies represent the outer halves of his journey and bypass the unfortunate middle period. All of them are in the traditional four movements, and they are generally thoroughly tonal.

Perhaps this should have been a job for the Milwaukee Symphony Orchestra, in tribute to Lukas Foss, its music director from 1981 to 1986. But it is no less welcome in these fine performances by Gil Rose and his Boston Modern Orchestra Project. Foss fled Nazi Germany with his family in 1933 and arrived in America in 1937.

By the time I became a bonafide, dedicated follower of new classical and avant garde music, that is in the early '70s, Lukas Foss (1922-2009) was at a peak in public recognition as one of the leading modern compositional voices in the USA. I am thankful for that because it gave me the chance to hear much of his work, as recordings of it were fairly plentiful and readily available. His notoriety faded somewhat in later years as did the popular attention to new music and subsequently too my undivided attention to it for a decade or so.

The recorded repertoire of the music of Lukas Foss remains somewhat small. Much of what there is has been immured in multi-disc collections or features on multi-composer albums or is available only to download. I hope that the fact that the 2008 Harmonia Mundi recording of his Piano Concertos, with Foss himself among the soloists, has fallen into the last category is not an ominous sign for new recordings of his music (HMU907243 – from eclassical.com or Qobuz, both mp3 and lossless – NO booklet).

It was Lukas Foss' Quintets for Orchestra that lingered in memory long after encountering it at the July 27 concert of the Tanglewood Music Center Orchestra led by Michael Tilson Thomas. As if on cue, just after the last summer review was filed, arriving in the mailbox was a new double-disc set of Foss' complete symphonies from BMOP Sound, the house label of the Boston Modern Orchestra Project and conductor Gil Rose. I was soon devouring more from this unpredictable and often overlooked master.

Lukas Foss’s short essay on composition, included with the recent release of his complete symphonies by the Boston Modern Orchestra Project, says that incorporating multiple techniques makes “the resulting music more challenging. One is more likely to want to hear the piece again.” It’s a simple, insightful window into “Lukas Foss: Complete Symphonies,” which BMOP astutely performs under the baton of artistic director Gil Rose.

Jewish composer Lukas Foss has the only recording of his complete orchestral works released next week.

Foss was born Lukas Fuchs in Berline in 1922. The child prodigy moved with his family to Paris in 1933, before heading to America four years later.